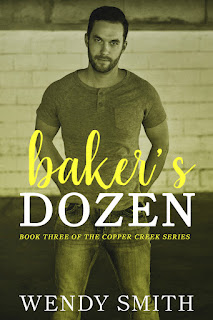 Note: This ebook was provided by the author via Give Me Books Promotions in exchange for an honest review.

Baker's Dozen is the third novel in Wendy Smith's Copper Creek series centered around the Campbell siblings in the fictional New Zealand town that shares the same name as the series. While you could jump into this book without having read the two previous novels, I'm going to go ahead and give my usual recommendation of reading the books in order because of recurring characters and certain back stories. While two of his brothers have found love with the women in their lives--reunited couple Adam and Lily and newlyweds Drew and Hayley--Owen isn't necessarily in a mad rush to settle down. He's happy playing the field while literally having his cake and eating it too as the owner and head baker of the Copper Creek Bakery. Then he meets his nephew's teacher and Ginny Robinson makes him want to experience the love of a lifetime others seem to enjoy. But when a tragic car accident leads to the revelation of a secret he never saw coming, will Ginny still want to be with him and will Owen be able to commit to being a family man? Can Owen and Ginny give what the other wants most?

If you've read the second novel, Doctor's Orders, then the secret that Owen finds out won't be that much of a secret. However, while I may have read that book and I did read the blurb for this new one, by the time I was able to read Owen's story, I had not only forgotten what that secret was from book two, but I had also forgotten which Campbell was getting their story told here in book three. Going in blind, though, is what proved to me that Owen and Ginny's romance could be read independently of either of the first two books, and it was an enjoyable romance to read. I'd have to say that my favorite part about it was seeing Owen become gain more maturity when he starts dating Ginny, and more so when he learns what was kept from him. We also get snippets from Drew and Hayley, whose story was the second book in the series and whose wedding opens this third book, courtesy of Drew's point-of-view. Owen and Ginny may have also nudged Adam and Lily down a slot as my favorite couple in the series so far, as did their love story. I'm giving Baker's Dozen a rating of four stars. ♥