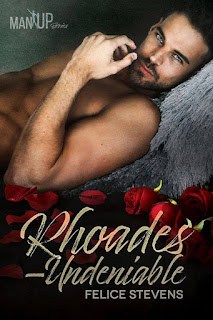 Rhoades - Undeniable is the second book in Felice Stevens's Man Up series, and while the series starter may have been more novella in length, this new release is a full-length novel and bumps Rhoades MacKenzie and Austin Poole's love story a couple of notches up. Picking up immediately where Austin left off, book two finds Rhoades and Austin at an impasse, with the younger man refusing to have anything to do with the enigmatic man who has spent many a night watching him dance and has been sending him gifts. Austin knows what it's like to have men who thought that money made the world go 'round control him, and Rhoades reminds him too much of those very men. There's no denying that Austin is as attracted to Rhoades as the British-born real estate developer is to him. Rhoades would love nothing more than to show Austin that what they have is undeniable. Maybe if they spend more time together on a more professional rather than personal level, Austin will see Rhoades in a new light, but will ghosts from their respective pasts be too much for them to overcome?

The wait between Austin and Rhoades - Undeniable was a relatively short one, and there's a more substantial story that goes on here, with both main characters' back story being revealed. I had a better understanding of why Austin was as wary about becoming involved with a man of Rhoades's stature, although he did have me rather frustrated with his waffling. I had no idea that Rhoades had such a heartbreaking episode that's led him to be as distant from even those who are closest to him. I liked seeing a bit more of James Rutledge than his being the owner of Man Up, and I have a feeling I know he could be paired with if--when!--he gets his story told. Aside from James, there's also the other dancers from the club who have me curious, so I'm definitely going to be keeping an eye for more from this series to see where Felice Stevens takes it. There's a bit more of everything in this second book, and because of that, I also felt like I got to know both Rhoades and Austin better, allowing me to become more invested in them and their story. Rhoades - Undeniable receives 4.5 stars. ♥