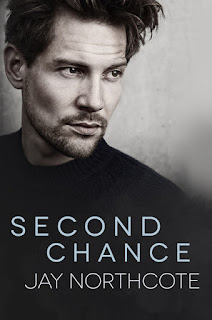 “I'm sorry I was careless with your heart—when we were kids, and now. I'm sorry that I ever made you feel as if I was ashamed of being with you, or as if you weren't important to me. Because you are.”

I've read quite a few of Jay Northcote's books over the past couple of years, but Second Chance is my favorite from the author so far. This latest standalone, at its most basic, is a second-chance romance, but it has so much more going for it than that. It's the story of forty-five-year-olds Nate Harris and Jack Redford, two men who were once the best friends, but that was when Nate was still Nat--Natalie--the tomboy who was always closest to Jack and who was by his side as he discovered his sexuality while they were teenagers. Their friendship fell to the wayside as they became adults and their lives going in directions away from one another.

It's more than a decade and a half later when they find themselves back in their hometown. Nate has brought his sixteen-year-old daughter with him and Jack his sobriety. As they rekindle their friendship, Jack not only rediscovers the best friend of his youth, but also discovers the man that Nate is today--a man that Jack is quite attracted to. But is being friends with benefits enough for Nate when it comes to the boy he loved and falling for all over again? And while Jack may want more, is he ready to deal with going public with their relationship?

Second Chance isn't the first book I've read that had a transgender main character, but it is that first that allowed me a better appreciation of the complexities involved with being transgender. Yes, there were mentions of the more medical aspects, but the character of Nate, who transitioned from female to male, delves into the emotional and thoughtful perspectives as well. And while Jack may have been accepting of Nate as trans, I respected the fact that he wasn't made to be this overly ideal main character. He had moments of doubt and fear, especially when it came to be open and honest about what he and Nate shared with his own parents.

This was a story about second chances for both main characters, whether it be at their own estranged friendship or the relationships with their families--Nate strengthening his relationship with his mother and bolstering the one he has with his daughter and Jack taking a stand when it came to his parents--or more notably, starting over with their respective lives. With Second Chance, Northcote delivers a story about love and how the second chances that are not squandered could turn out to be the most rewarding ones. Five-plus stars. ♥