Release Blitz: A Love to Remember by Sarah Hadley Brook 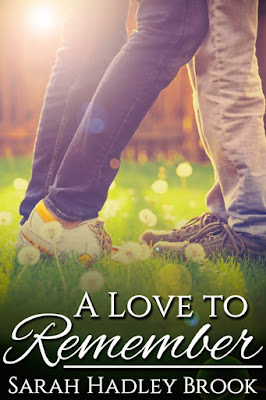 About A Love to Remember
Graham Hayes decided long ago he’d never be in a relationship. It was better to stay single than to fall in love only to be left alone, which he was certain would happen to him. He’d seen Alzheimer’s ravage his family members all his life, leaving their loved ones to deal with the fallout. Some of them stayed, but some didn’t. Graham isn’t going to risk it.

When he hires nurse Sam Morgan to take care of his dad during the day, his pledge to stay single is put to the test. He soon finds it difficult to maintain a professional distance.

Graham’s guarded his heart for so long, but his resolve is crumbling. Will he be able to conquer his fear to give himself a chance at love? Can he trust Sam to stick around for better or worse?

Add A Love to Remember on Goodreads.

An Excerpt from A Love to Remember
The doorbell rang just as Graham took a seat at the table, preparing to try and get some work done. It had been days since he'd even opened his laptop. He groaned. Looked like it wasn't meant to be for the moment. His dad had finished his granola cereal and was sitting on the sofa, reading a book. It was still early enough in the morning where he seemed to have most of his faculties.

Assuming it was the home health care aide the agency was sending over, he didn't bother to check the peephole or the window next to the entrance and swung the door open.

Graham's jaw dropped and he stood in place, his feet frozen to the ground. Was he hallucinating? What the hell was going on? He stepped out and pulled the door partially closed behind him so he could speak to the man on his doorstep. The man currently grinning down at him.

"What are you doing here?" Graham hissed. "How did you find me?" He glanced up at the man he'd met at the club and wondered if he should call the cops. Wasn't this considered stalking? It didn't matter that his body reacted in all kinds of weird ways. He could be dangerous. And compared to Graham, the guy was huge.

The man stepped back and held up his hands, palms out. "Hey, I had no idea you lived here."

"No, seriously," he insisted. "The agency sent me here."

Graham stared up at him—probably a little too long at the man's massive chest—and finally shook his hand, shaken by the jolt of electricity coursing through his arm. "Okay. Um, come inside?" His voice was trembling. Get a grip!

S.G.—Sam—followed him inside, ducking his head as he walked through the doorway.

His dad didn't look up, so Graham led the man to the kitchen table, gesturing for him to take a seat. He wasn't even sure what to say. Or ask. He felt awkward. And silly for thinking the guy was stalking him. Graham had only been a quick fuck at the club for Sam. A means to an end. Nothing more.

He sat across from Sam and stared. The man was even sexier in the daylight. Dirty blond hair cut close to the scalp, a little longer on top. In the light he could see his eyes were the color of caramel. Hazel, maybe? He fought the urge to reach across the table and stroke the stubble still covering his jawline. And shit, the man was broad. Huge. He'd thought of him as a warrior that night and he found himself thinking that was still an apt description.

Sam frowned. "Hey, don't stereotype me," he said quietly. "I love being a nurse."

Sam's frown turned into a grin. "Yeah, not exactly what I was expecting this morning, either." He tilted his head toward Graham's dad on the sofa. "I assume I'm here for him?"

"So you must be Graham Hayes?" Sam's voice was quiet, his gaze on Graham.

"Yes. I'm sorry. I should have introduced myself." Shit. He was blundering this. He'd never felt so off-kilter when it came to a man. "Do you want something to drink?"

Sam shook his head. "No thanks. Right now, can you fill me in on your dad? Let me know what's going on. I have some basic information, but it always helps to get specifics from family."

"Sure." Graham glanced at his dad and saw he was still engrossed in his book. He wondered if he'd even turned a page. Was he struggling with reading, too? Graham turned back to Sam, who was watching him, patiently waiting for him to continue. "I'm not sure what you want to know?"

Sam leaned back and offered him a small smile. "My job is to make your life easier and help the patient feel better. Why don't you just tell me a little about your dad?"

About Sarah Hadley Brook
Sarah Hadley Brook lives smack-dab in the middle of the Heartland and is the mother of two wonderful young men, as well as two cats. During the day, she works in the nonprofit world, but reserves evenings for her hobby-turned-passion of writing, letting the characters she conjures in her mind take the lead and show her where the story will go. When not working or writing, she can be found reading, working on dollhouses, trying her hand at new recipes, or watching old movies and musicals. In her ideal world, Christmas would come at least twice a year, Rock Hudson and Doris Day would have costarred in more than three movies, and chocolate would be a daily necessity. She dreams of traveling to Scotland some day and visiting the places her ancestors lived. Sarah believes in “Happily Ever After” and strives to ensure her characters find their own happiness in love and life.