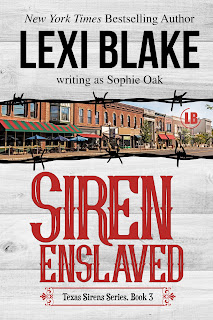 The third book in Lexi Blake's Texas Sirens series has just been re-released, and if you've followed the series, there's no way you could have missed the presence of Julian Lodge, owner of The Club, a private enterprise dedicated to the BDSM lifestyle. When the forty-one-year-old Master released his last slave from their contract, he did so because he knew that he couldn't give her what she needed and wanted. Feeling lost and unsure of his personal life, he decides to head to Willow Fork, Texas to visit friends. On his way there, he inadvertently rescues a thirty-year-old runaway bride named Danielle Bay. The woman's submissive nature is as clear as day to a Dominant like Julian, and he has no qualms opening her eyes to the pleasures her body is just waiting to be unleashed. When her best friend, thirty-year-old lawyer Finn Taylor, finally locates her after she was a no-show at her own wedding, he's shocked to learn that she's with someone like Julian. He'll be damned if he lets the girl he's always loved be with the billionaire, but Finn may be surprised by just how much he's drawn to the cool and confidant man from Dallas.

I've been itching to find out who would put a man like Julian through the ringer, and he definitely met his match in Dani and Finn. These two already had an established relationship based on years of being the closest of friends with secret desires to be far more but never sharing that wish with each other. Dani may have initially come off as a woman who was naive and easily swayed, but too many people underestimated what she was capable of. Finn allowed Dani to continue believing that he was gay when, in truth, he was bisexual, and Julian pushed her away in such a heartbreaking manner. These two men who loved had no clue just how strong of a person she was because if Dani could love not just one but two guys like them who had their hang-ups, well, it just showed how much fortitude she had and how much love she had to give. It was also nice to see the original trio in the series--Jack, Sam, and Abigail Barnes-Fleetwood--as well as Lucas Cameron and Lexi Moore, Jack's younger brother and Abigail's oldest daughter, respectively, whose own story is up next in this highly addictive series. 4.5 stars for Siren Enslaved. ♥