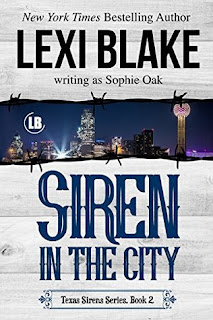 Abby and Jack are legally married, but they share their vows with Sam, with all three of them dedicating themselves and their future together. When Jack ups and leaves, all Sam and Abby have to go on is a note he's left behind. Sam figures out where Jack's headed, and he and Abby decide to make their way to Dallas where The Club, a place that both Jack and Sam know all too well is located. What made Jack decide to go back to the exclusive BDSM club, and when Abby and Sam find him there, will they be able to convince him that his home is with them?

I adore Jack and Sam. They're very different men, but they're both loyal and when they love, they're all in. Abby wasn't just a woman they shared either; she was the very heart between them. When Abby said that they'd Dom being away was the opportunity for the subs--her and Sam--to play was exactly that, but not in the cheating kind. Their world truly revolved among the three of them, so Jack going missing had the two being all sneaky, wanting to be there for the man they both loved. I liked seeing that connection between the two of them, how strong it was.

We've got Jack coming clean to Sam and Abby and vice-versa, but we're also introduced to quite a few interesting supporting characters as well. From Julian Lodge to Lucas Cameron to Leo Meyer and even the mere mention of Abby's daughter, Lexi Moore, and Lexi's boyfriend, Aidan O'Malley, there appear to be a bevy of potential characters whose stories are just waiting to be unleashed as the series moves forward, and a quick peek at Goodreads confirms my suspicions. Color me excited! Fingers crossed they're as good as Siren in the City. 4.5 stars! ♥

Purchase Siren in the City on Amazon | B&N | iBooks | Kobo.