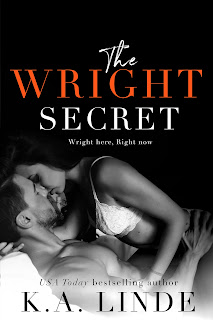 “I think we should go slow because I want to do this the right way for once.”

She paused, and I saw the anger slip away. “You want to do this right?”

“Yeah,” I said, suddenly nervous by my own outburst. “You’re different, Morgan. You’re not just some girl. You never have been, and you never will be.”

After just a snippet of what I saw in The Wright Mistake, I was itching to see what story would await twenty-seven-year-old Wright Construction CEO-in-waiting Morgan Wright and her brother Austin's best friend, thirty-one-year-old Patrick Young. It was pretty clear what the trope was going to be--falling-for-your-sibling's-best-friend--and my bookshelf and to-be-read list are littered with countless versions of it. How was bestselling author K.A. Linde going to put her own spin to it, and would she succeed in making The Wright Secret, the fourth in her series about the six Wright brothers and sisters who lost their mother to cancer and their father to his own alcoholic excesses, stand out from the crowd? Allow me to answer the second half of that question first: Yes, she so abso-fucking-lutely did!

As for the first half of the aforementioned questioned, Linde highlights the trope with the aid of both Morgan and Patrick deciding to keep their blossoming relationship a secret from her brothers, generally due to the fact that all three of them are overly protective and specifically because they fear how it'll affect Patrick's being best friends with Austin. I also appreciated that the transition between Morgan and Patrick being close friends to becoming lovers and then even more wasn't protracted, as has been the case in more books than I'd care for. As for how their respective families, which are close given that the two sets of siblings are all friends, handled the revelation of the secret, well, it played out the way expected it to, BUT again, Linde didn't torture me with prolonging the inevitable.

But again, how does the author manage to make this different? Two words: female empowerment. Morgan steps in to the position of CEO of their family-owned company, a position she knows she's worked for and deserves, but it's also one that she knows going in that she'll have to constantly prove herself worthy of simply because she's a woman. Then there's the complication brought by their scheming uncle (though his two sons appear to be good guys, which leads me to wonder if they'll be featured more prominently later on and if they'll end up getting their own books--which I doubt, but hey, I love this series, and I wouldn't say "no" to more books), who forces her into a position that has her blaming her lack of focus on the easiest targets she finds--Patrick and their new relationship.

I loved that Morgan wasn't some simpering female who needed a man to make her feel worthy. She was ambitious and she knew what she wanted and would go after it. That doesn't mean she was perfect. If anything, she was a workaholic who had difficult balancing her personal and professional lives, and I'm not just talking about her romantic one. She needed to realize that her constant touchstones--her siblings and Patrick--were there for her, but that she also had to put in the time to appreciate them. Patrick here was such a revelation. The manwhore was gone, and in his place was a man who loved Morgan and supported her in her dreams and ambitions, but also reminded her that she was a woman, a girlfriend, and a sister. Seriously, Patrick was exactly who Morgan deserved.

The Wright Secret is my favorite in the series so far, and that's saying a lot because I've enjoyed every single book that's been released. Aside from the love stories between each couple, there's also the relationship that each sibling has with one another. They have their squabbles and their disagreements, but at the end of the day, they're there for each other. With Morgan and Patrick's story, that only leaves one Wright sibling left--Sutton, and I feel like her story is going to be a doozy, given that she became a wife and mother at a young age, and soon after a widow. We see glimpses of something between her and David Calloway, the CFO for Wright Construction, and I can't wait to peruse their story in the upcoming duet! For now, check out the five-plus-starred read that is The Wright Secret. ♥

Read my reviews for the Wright series: