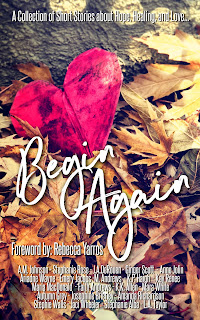 Note: This ARC was provided by the authors via Foreword PR & Marketing in exchange for an honest review.

Begin Again is a multi-authored collection of twenty-two short stories that focus on the power of love and how it can heal those mired in despair. For the purposes of this review--and no thanks to time constraints--I'm only reviewing four short stories AND the foreword (I'll explain why in a bit). I confess that I chose the stories based on authors whose past work I've read and loved. When time permits, I'll be jumping back into the anthology and go through more stories, and then I'll be amending this review to include the rest of them for a more informed rating.

Okay, I mentioned the foreword, which I got weepy over, and the reason it stood out to me was because it was written by one of my all-time favorite go-to authors, Rebecca Yarros. Whatever it is I know of her is based solely on what she shares with her fans and readers online, so I was gobsmacked when I read her foreword. I'm not going to give it away, but suffice it to say that after having read it, I now not only admire the woman for her writing and her being a wife and mother, but also as not just a survivor but as a victor of her circumstances and as a human being.

The first short story I read was A.M. Johnson's A Hypochondriac's Notebook, which is told in four parts. Anna Josh's tries to kill herself at fifteen, finds love at twenty-three, and is married and a mother at thirty-eight. But those are mere bullet points. Her story is complex but her needs and wants are simple, and Johnson, who blew me away with my first read from her, Sacred Hart, and her Avenues Ink series, still managed to pull one heck of a plot twist for such a short read and in the subtlest of ways. Anna Josh is awkward but real and her story hopeful. Five stars.

Something Beautiful is the second story I read. Written by Emery Jacobs, this was the story of Emmie Carmichael, a divorcee finally moving forward with her dating life. Her best friends tease her about having a particular type--blond-haired, blue-eyed, clean-cut, and financially secure. But it's someone who's the complete opposite who seems to have caught her attention now. The question is: Could Beau Matson ever be interested in her? This doesn't have a definitive ending, so I'm hoping it's a prequel to an upcoming standalone from Jacobs. Four stars.

I've loved Ginger Scott's work in the past, and while her contribution here is far shorter than her usual stuff, it is no less just as good as her full-length fare. It Started With Summer has Megan, the teenage child of divorced parents, less than enthusiastic about having to spend her summer with her mom, younger brother, and her mother's fiancé. She's prepared to hate this vacation, but then she meets Chris and it's the beginning of unexpected possibilities. I'm torn between wanting a full-length version and Scott leaving it as is--which is hopeful and darn cute. Five stars.

The last story I read was Waiting for Autumn, penned by J.A. DeRouen, another author whose work I've fawned over. Sebastian Kelly, Brady Norris, and Autumn Norris were the Fearsome Threesome, but all their hopes and dreams were thrown to the wayside after an accident. Five years later, Seb returns to his hometown of Prosper, Louisiana on the heels of his parents' deaths. It's a time to say goodbye, but could it also be a time to say hello...again? I'm not sure if this is a prequel to a possible book, but either way, I quite enjoyed this one. 4.5 stars.