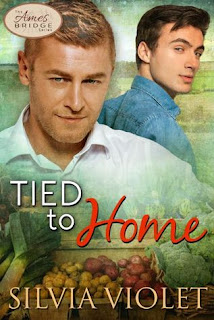 Tied to Home is the third book in Silvia Violet's Ames Bridge series and it's a May-December love story between twenty-one-year-old Luke Sumner and thirty-eight-year-old Jack Lawrence, Luke having lived his entire life in Ames Bridge and Jack returning to their hometown and becoming the proud owner of the local inn. Both men are in the closet. There are a very select few who do know about Jack's sexuality, fewer still those who know about his preference for dominance in the bedroom. No one knows about Luke being gay nor about his desire to submit and be controlled by an older man. His family is already overly protective of him, no thanks to his health issues when he was very young, but if they found out about his sexuality and perceived perversions, he could very well break their hearts. Luke and Jack have taken notice of one another, and when their paths cross at private BDSM club, it becomes clear how compatible they truly are. But with seventeen years and too many secrets swirling around them, will Luke and Jake be forced to cut their losses and then cut ties with family, Ames Bridge, and each other?

I quite liked the direction that the author chose to take this story. The age difference is a complication, but only to those around them who see Jack as some pervert who went after a much younger man. This was really about Luke coming into his own, and not just in terms of his sexuality. He comes from a family that loves him, but they're also quite stifling, which leads to them limiting Luke to certain expectations because of their fear that something bad will happen to him health-wise. In as much as Jack is supportive of Luke wanting to break free from his family and his hometown, he pushes him into making a decision because it's what he believed what was best for Luke. Sooo...it was kind of like what Luke's family was doing as well. I loved that Luke stood tall when it came time for him to make known what he was feeling and what it was he truly wanted and needed. He didn't insist nor did he force anyone into agreeing with him. He simply stood firm and stated his intentions, and in the end, Luke proved just how much he had grown in a matter of months. I'm giving Tied to Home 4.5 stars out of a possible five stars. ♥

Read my reviews for the Ames Bridge series:

The Past Comes Home (book two) - four stars - My Review

Purchase Tied to Home on Amazon.