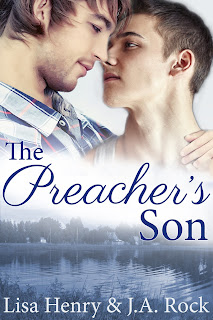 Note: This ARC was provided by the authors via A Novel Take PR in exchange for an honest review.

Jason couldn’t swallow around the ache in his throat. It wasn’t shame he felt. It wasn’t guilt. It was something much larger, something with no name. Something monstrous that he stood no chance against; it had power beyond human comprehension. He would have given his fucking life in that fraction of a second to take away Nate’s tears, to take away the reason for Nate’s tears. But he was the reason. He was, and he wished the roadside bomb had fucking vaporized him, if there was any chance that would make things right with Nate.

I became a fan of Lisa Henry and J.A. Rock after reading their Playing the Fool series, and have gone on to love their solo releases as well, particularly Henry's witty Adulting 101 and Rock's addictive The Subs Club series. Their latest release's title, The Preacher's Son, caught my attention because I had a feeling it would push buttons. The synopsis had me desperate to read it and had me hoping that I wouldn't be disappointed. I should have known better than to even wonder if this particular writing partnership would satisfy me. This standalone of theirs didn't merely entertain me; this story and these characters made me stop and ponder certain things I've held true at one point or another, whether they be something I was taught in school or during mass or something I learned living my life.

To label Nathan Tull and Jason Banning's story "enemies-to-lovers" would be a disservice, and that's not me knocking the trope (one that I consider a favorite of mine). What I'm basically saying is that this was so much more than two people who may have less than glowing opinions of one another falling in love with each other as their story develops. Nathan was eighteen when he met twenty-two-year-old Jason while doing a college visit at the college senior's school. There was an attraction both recognized and wanted to pursue. However, Nathan was the son of a known conservative church leader with a gay conversion camp of sorts. And Jason? Well, when he realized who Nathan was, the aspiring journalist had one goal in mind: use the teen to highlight Reverend Tull's hypocrisy.

Fast forward four years later and Nate works as a counselor at his father's camp, a living and breathing success story with a girlfriend by his side while Jason returns from Afghanistan with a leg injury and no real prospects. Their experiences from four years back onwards have changed them both, but one thing seems to have remained the same: the connection they once shared hasn't merely lingered; it's burning bright. While Jason is outwardly lost, Nate begins to question and wonder about the life he's been leading. He's just as lost as Jason, and as much as he was hurt four years prior, it was also Jason who made him be comfortable in his own skin for the first time, giving him a feeling of freedom he never felt before nor since. But if history repeats itself, will the ending remain the same or will Nate not only stand up for what he has with Jason but for who he is and will Jason be by his side?

As a romance fan, I appreciated this as a love story. These two young man had issues which may have seemed insurmountable. I mean, what kind of future can you have if deception was once a part of your past? Nate and Jason struggled and doubted, but that's part of what made the outcome of their story so rewarding. As a reader in general, I applaud this book and its authors because it not only gave me the so-called "feels" but it also gave me something to think about. I was born, raised, and remain a Catholic, although I do consider myself more of a progressive one, meaning I practice parts of my religion but I also believe changes need to be made because the world has evolved over the centuries, especially within the last decade or so, and I think so should church leaders. This book highlighted what I believe: that religion and faith are not necessarily the same thing. Religion without faith will flounder because the former needs the latter, but faith can exist without any sort of standardized religion.

Now, I know there are those who don't like religion or faith or both as part of the fiction that they read, but well, I'm not one of those people. I believe that God loves and accepts us wholeheartedly, without preconditions or expectations. There were aspects to both Nate and Jason that I not only empathized with but I that I recognized, and maybe that's why this book calls to me as much as it does. Neither the authors nor the story they tell pontificate; at least, that's how I felt. This didn't come off as preachy or condescending or even mocking. This was, at its very core, a story about love and trust as well as acceptance and faith. Just like with different religions, readers may have different interpretations of this book. My reading experience with The Preacher's Son may not be like someone else's but what I do hope is that readers give it an honest-to-goodness shot. Go into it with an open mind and heart, and hopefully, you'll see why I'm already calling this one of the best of 2018. It gets five-plus stars. ♥

Purchase The Preacher's Son on Amazon.