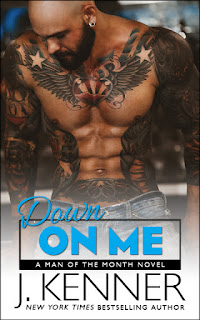 Down on Me is the first novel in the brand-new series from bestselling author J. Kenner entitled Man of the Month, and yes, there are twelve books in the series, but no, they won't be released every month. Instead, each installment is released two weeks apart. This first one, which is a friends-to-lovers romance, has me a bit on the fence. I wasn't a fan of the beginning, and I certainly did not like how things played out leading to the ending. Everything in the middle, however, did hold my attention, though if I'm being perfectly honest here, this series starter was not my favorite J. Kenner read, which makes me sad because I've often loved this author's love stories.

Jenna Montgomery, Reece Walker, and Brent (no last name mentioned) have been the best of friends of years, but eight months ago, was a turning point of sorts for Jenna and Reece. She wanted him in a way she didn't want her other best friend. What she didn't know was that Reece has wanted her far longer, but as far as he was concerned, he could never pursue his feelings for her. When resistance proves to be futile, Jenna and Reece cross a line they won't be able to come back from. Sex between them is intense, and there's no denying their connection. She dreams of love and family--a happily-ever-after, but how can Reece give Jenna something he's never believed in?

Okay, I mentioned at the beginning that what killed this book for me was the beginning and the ending. Turn away now if you don't want to read potential spoilers. Reece was basically having sex with another woman on the very day Jenna was returning to their hometown. The clincher was that he didn't have sex with anyone else since that heated moment between the two of them eight months ago. The sudden need to have sex with someone else and ditching his female best friend, passing on the responsibility of picking her up from the airport to their other best friend, was a jackass thing to do. Maybe it was self-sabotage, maybe it was selfish. The point is, he was an asshat.

Everything was better after that fiasco, but then, ugh, Jenna did something I was not a fan of. Again, turn away if you need to. I'm sorry, but pressuring someone to marry you because you're pregnant is a major no-no for me. She flat-out knew what Reece's issues were regarding commitment--marriage, in particular--and yet, she thought being pregnant was the perfect way to make him do something he didn't want. Sure, maybe he would change his mind later on, but come on! Whatever respect I had for Jenna diminished. She claimed she couldn't allow herself to give in to him, but she demanded he give in to her? Yeah, that's a no from me. Sorry but I give Down on Me three stars. ♥