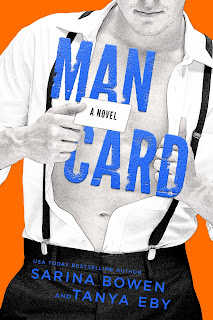 Braht is pretty much good at everything.

And I mean everything.

I'm worried I might falling for the fashionable fucker.

How the hell am I supposed to resist a guy who's willing to give up his man card for the woman he loves?! Tell me, Sarina Bowen and Tanya Eby! Gah! Sebastian Braht was such a revelation in Man Card, the second novel in the Man Hands series from this fairly new writing duo. He turned out to be so much than I was expecting, but then I was basing my expectations on his being a supporting character in the series starter. If his, umm, not-so-little appendage earned him the nickname "bratwurst", well the man himself was so far from being the "worst". Can I just call him BrahtBest? Seriously, the guy had me wanting to nominate him to the book boyfriend hall of fame. He was THAT irresistible, and even though she wished she were immune to his charms, Ashley Power did succumb, and boy, oh boy, the fall was as hilariously sweet as I imagined it would be. And yep, Braht was there to catch Ash.

What you get from Braht and Ashley in the first book is just a smidgen of who they really are. I loved getting to know these two even better in this second book. They've got certain secrets connected to their respective pasts that they're keeping from one another--although those closest to them and who know them best are privy to said secrets--and let's just say that those secrets could very well make or break these two and the love and trust that they're beginning to build. It's them facing those personal demons of theirs that make for the more angsty part of the story, but when I say "angst", it's not the kind that will make you feel as if you're drowning in sorrow. There's nothing light about what they've endured, but they have come out of their own experiences far stronger, and this is, after all, a romantic comedy read, so the amount of angst is enough to placate a die-hard angst addict like me.

Speaking of this being a rom-com, well, Bowen and Eby definitely do NOT disappoint! From the ongoing competition between Braht and Ash to the drunken antics of best friends Ash, Sadie, and Brynn, the humor was certainly not lacking. I also liked the introduction of Bramly, Braht's younger brother, and that familial connection is just one of the ways that allowed me to see Braht as more than the manwhore and metrosexual he was pegged to be. Yeah, the guy spent A LOT of time making sure his nails were buffed, his hair coiffed, and his fashion on-point, but I'll take that over a guy who doesn't think showering on a daily basis is a must. The rest of the supporting cast of characters brought even more of the comedy and throw in a bit of suspense, and Man Card proved to be even better than I expected it to be (and I was expecting it to be fab!). This gets five-plus stars, and I hope Sadie's book is in the works (she totally needs an HEA) and maybe a novella or short story for Bramly. Yes? Maybe? Pretty please? ♥