Review: When the Stars Come Out by Laura Trentham (Cottonbloom #5) 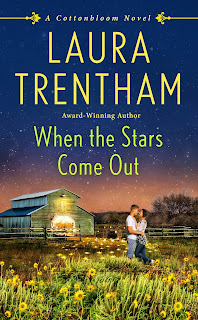 Laura Trentham is my go-to author when it comes to small-town romances. My introduction to her writing was via her Falcon Football trilogy, and I fell for her witty and weighty love stories with the town of Falcon, Alabama as the backdrop. Her Cottonbloom series, however, is what has cemented my love affair with her storytelling. Set in the neighboring rival towns that bear the same name but located in different states, connected by a bridge and the Mississippi River, readers met the Fournette siblings from the Louisiana side in the first three full-length novels and were treated to two novellas in between those and the next half of the series. This time around we've got the Abbott brothers on the Mississippi side--Ford (the eldest but also the black sheep, refusing to have anything to do with the car business left to them by their father), reliable Mack, and fraternal twins Jackson and Wyatt. The youngest Abbott got his story told in Leave the Night On, and the latest release is his twin brother's story, one that twenty-eight-year-old Jackson shares with a very familiar face--that of twenty-five-year-old mechanic Willa Brown.

For two years, Willa has worked side by side the three brothers at Abbott Brothers Garage and Restoration in Cottonbloom. She's taken what she learned from her father and she knows she's good at what she does. She also happens to be good at keeping her past secret, barely sharing more than what's necessary with the three men who welcomed her into the fold. While Mack and Wyatt see her as a little sister of sorts, it's only when Jackson whips off the cap Willa always has on her head that he realizes that she's very much female, and a beautiful one at that. When he begins to suspect that she's planning on running from her life in Cottonbloom, Jackson makes it his mission to ensure that she stays with the garage...and with him. But it isn't just Willa's dark past that Jackson has to get a handle on. With the garage in limbo because of his oldest brother's threat to sell his portion of the business, Jackson, Wyatt, and Mack have to figure out their options before it's too late. When everything comes to a head, Jackson and Willa will have to choose to lean on each other for support or be pulled apart by their secrets.

This book exceeded my expectations, giving Willa a back story I wasn't expecting and moving Jackson's own history with his estranged mother in a particular direction, which I won't get into because I'm going to insist you see it all play out by reading this fifth full-length Cottonbloom novel. As much as Willa had a crush on Jackson all the time she was working for the guy, can I just say that I liked how clueless he was and that he had to learn how to reconcile the talented grease monkey in coveralls with the pretty woman who was underneath his nose (and those coveralls) for two years. Of course, the story arc regarding family was still in full effect, and as much of a jerk as Ford tends to be, it was clear that the man had his demons. Mack's story is up next--and it looks to be an enemies-to-lovers romance with a woman who's bound to keep on his toes--but I hope Ford gets his story told and find love and peace of mind as well. The five-starred When the Stars Come Out definitely doesn't disappoint, and if you're in the market for an engaging small-town romance series, look no further than Laura Trentham's Cottonbloom books. ♥

Pre-order When the Stars Come Out on Macmillan | Amazon | B&N | iBooks | Kobo.