Review: Kiss Me That Way by Laura Trentham (Cottonbloom #1) 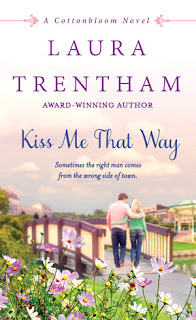 "I thought about you, too." She moved next to him, laying her head on his chest, and he closed his eyes. "I used to pretend my pillow was you and practice kissing it. Mostly, though, I would just hug it and pretend you were hugging me back."

The intensely vulnerable feeling that shot through him was something he'd never experienced. He'd done crazy things before–some downright dangerous–but he'd never been stymied by hear. He was a risk taker by nature.

"You're a much better kisser than my pillow."

I may have been a fan of her Falcon Football series, but the first book in her new trilogy has not only solidified my being a fan of author Laura Trentham's, it's also made me think of her as this generation's go-to author when it comes to small town romances. She's taken what she did with Falcon, Alabama and ramped things up with Cottonbloom, a town separated by the river, with one half in the state of Mississippi and the other becoming a parish in the state of Louisiana. Over the past half a century, the rivalry between the two Cottonblooms has gained momentum, so the idea of a swamp rat like seventeen-year-old Cade Fournette and a 'Sip like thirteen-year-old Monroe Kirby confiding in one another would have raised more than a few eyebrows. But what these two shared for years was more than friendship and more than being surrogate siblings. It was innocent but nonetheless intimate, Cade and Monroe entrusting secrets they would never share with anyone else. Then one day, Cade left without a single word.

Kiss Me That Way is the story of two people who found one another in the most unexpected of ways and form a bond that may not have made sense to anyone else, except it was a bond that they kept to themselves and each of those meetings when the moon was full underneath their cottonwood tree, they felt safe, like someone truly cared about them. Then six or so years later, Cade Fournette is forced to leave his hometown, his siblings, his uncle, and Monroe, not really having much say in the matter. It takes a decade for him to come back to Cottonbloom, and if he were given a choice, he probably would not have returned. But with his return comes a reunion with Monroe Kirby, who has matured into a woman who has found herself a purpose beyond that of her job as a physical therapist and is passionate about it. However, Cade isn't the young man who did anything and everything to make sure his two younger siblings were taken care of. His innovations have made him quite a wealthy man with a business in Seattle.

While neither one may have been pining for the other over the past ten years, they've secretly had more than passing thoughts about how each one has been faring. Thrown together by both necessity and circumstance, Cade and Monroe are older now, and while they had their moments when they were together years ago, wondering about one another in a non-platonic manner, the pull has become far more seductive and much more difficult to resist. But Cade's return to Cottonbloom brings with it all those memories of a past he's tried to move forward from. His financial portfolio may make it clear that he isn't living in poverty any longer, but in his head, he can't help but see himself as always being the swamp rat from the wrong side of the river, and Monroe has always deserved better. He's also got secrets he's keeping from his brother and sister and their relationship, now strained and filled with wariness, needs desperate mending. How will Cade and Monroe move towards a future if their pasts refuse to let them go?

Now this, this is the kind of series starter I crave for. Laura Trentham's gift isn't limited to putting into words the stories her characters are itching to share with you. Her words evoke images, allowing readers to picture in their minds what Cottonbloom–whether in Mississippi or in Louisiana–may not just look like but how people interact with one another or how one person simply basks in the beauty of it all. But even then, Cottonbloom isn't all picturesque scenery and meaningful history. There's a darker, uglier side to the town, from the families that look down their noses at those they deem unworthy to the individuals who prey upon those they consider weak and defenseless. You see, Laura Trentham doesn't create fictional towns that are ideal. What she does is gives us locations that are real, making it far easier for us to form a kinship with its residents. Of course, there are all those supporting characters–both the charming and not quite as charming–who sneak up on you and make you want to learn each of their sins and secrets.

Just like countless small towns, the town of Cottonbloom lulls you into a state of complacency, but it is never boring. Both Cade and Monroe are battling old demons and dealing with new complications now that their paths have once again–and rightly so–intersected. Aside from their blossoming relationship, there are the social politics that come into play, especially with Cade and his siblings having to live hand to mouth after their parents were killed in a car accident, as well as their family issues that need to be addressed–Cade with his siblings who feel as if he abandoned them years ago and Monroe with her mother who refuses to admit she has a problem that can no longer be swept under the rug. Sawyer Fournette and Regan Lovell have piqued my curiosity, what with their rivalry and lovers-to-enemies story, but even though it's Tallulah Fournette and Nash Hawthorne's book that's up next, I'm more than looking forward to reading it. Kiss Me That Way is a small town romance that's really big on heart. Five-plus stars. ♥

Purchase Kiss Me That Way on Amazon | B&N | Kobo.