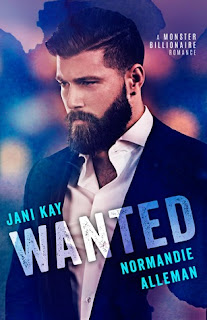 Wanted is the first novel in the Monster Billionaire contemporary romance series from the writing duo of Jani Kay and Normandie Alleman. I've read a few of Jani Kay's books before, but this is the first time I've read  anything by Normandie Alleman. Here we've got Foster Cruise, a man born into wealth, worked with wealth, and ended up in prison for five years for a white collar crime related to other people's wealth, a crime in which he has adamantly proclaimed his innocence. Now, he's finally free from the cage that he was kept in, but he isn't naive enough to believe that there aren't people out there still look at him with disdain, believing he played a part in the Ponzi scheme that wrecked many lives. His parents may have turned their back on him, but Foster is ready to make a go of his new life, one funded by the trust fund left to him by his grandmother. Unfortunately, living as if nothing ever went wrong doesn't sit well with Addison James, and she's prepared to do almost anything to get close enough to Foster and make him pay.

When I first read the synopsis for this book, nothing about it prepared me for the comedic aspect lying in wait when I finally went through the story. Methinks "high jinks" should have been Addy's middle name because the girl certainly didn't care what it took to put her plan of vengeance in motion. The story was creative enough to set it apart from a lot of the other books that are coming out this release week and both Addison and Foster were characters that were interesting and making it easy enough to empathize with their respective situations. I did think, though, that the resolution regarding the money that Addison's grandfather lost was too simplistic and there seemed to be no believable motivation behind the change of heart that was involved. Also, there was an inconsistency in terms of Ruby saying early on that she was previously engaged and then Addy saying much later on that she had no idea Ruby was engaged. Still, Wanted proved to be an four-star read, and I certainly wouldn't mind reading more from this new series. ♥