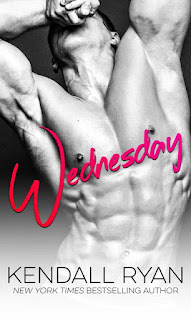 
Short, sizzling, and sweet. If I had to give just three words to describe Wednesday by Kendall Ryan, those would be the three I'd go with. I read this novella in less than an hour and in that short of a time and in a limited number of pages, the author was able to give readers a story that had a hint of poignancy with its angst-driven drama while packing a punch in the steam department. Chloe and Shaw were best friends since they were children, connected at the hip and there at a moment's notice for one another. Things changed when they went off to college and Shaw met Samantha, the woman who would later become his wife. Chloe understood and whatever longtime, crush-like feelings she had for Shaw had to be shelved away. And then Samantha was killed by a drunk driver and Shaw's life spiraled into darkness. His one moment of relief is the one he had with Samantha and it's a moment that they repeat every single week on Wednesdays. But Chloe wants more and Shaw knows she deserves it, but can Shaw go all in with his heart?

Chloe and Shaw's relationship is a very complex one, and there were definitely moments where I couldn't help but wonder if these two former best friends turned once-a-week fuck buddies weren't both using one another. Shaw to alleviate was weighing upon his heart after the death of his wife, and Chloe feeling some connection, even if it was limited to just a physical one, with the guy she wanted more than friendship from a few years back. But the fact that the unspoken arrangement they've made for themselves is still in full force more than eight months after it began clues us in on this being more than just sex for both, although neither one is ready to admit it out loud. This was a great story about love and friendship and how there are times that you need to take a step back and think about yourself and not be willing to accept crumbs when you deserve more and also be willing to take a chance on what could be the best thing to ever happen to you. Chloe and Shaw were, indeed, in a complicated relationship, but they were simple people with simple wants and needs: each other. I adored this book and it was in five-plus-star territory until the epilogue, which I can't get into but will say that I wish what they had done was named for Abe instead because the one it was named after so wasn't worthy of that honor. But Wednesday is still a five-star read. ♥