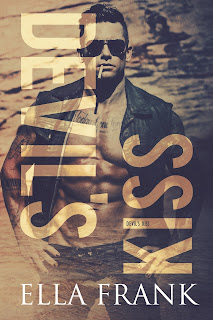 Finally giving in to an urge he'd had since they'd met, Jordan stroked his finger down the unaffected side of of Derek's face and heart him whisper, "Thank you."

"You don't have to thank me, Derek. You called and I—"

Understanding dawned, and Jordan leaned forward and promised something then that would forever change their lives. "Always."

Four books in—five including her co-authored book, Sex Addict, with Brooke Blaine—and I think it's safe to say that Ella Frank is officially on my go-to authors list. Whether it's her ongoing paranormal series, Masters Among Monsters, or my addiction to all things Sunset Cove, she hasn't failed to evoke both subtle and strong emotions out of me and has made me pause and ponder what I would do in the same situations as her main characters. Speaking of her characters, they have a way of embedding themselves into psyche, and not just for the duration of my perusing their stories. No, these men and women linger for far longer, and none more so than the couples in her Sunset Cove series. I was right in thinking that Daniel Finley and Brantley Hayes were going to be difficult to knock off their perch as one of my all-time favorite couples of any genre, they've had to make space available because Derek Pearson and Jordan Devaney are sitting right beside them, because the two men from Devil's Kiss are temptation personified.

The last thing that nineteen-year-old college freshman Derek Pearson wanted to bring attention to on his first day of classes was the bruise his abusive father had left on his face, but when his twenty-five-year-old history professor decided to call him on his Aviator glasses, forcing him to remove them, he decided to look defiantly at Professor Jordan Devaney and see if he had anything to say about it. And that was the beginning of the odd relationship between Derek and Jordan, not really one that could be labeled "love-hate". Even when they crossed the line years later, there was no apt enough label for them, or maybe they simply avoided labeling themselves, fearing what any particular one would mean or interpreted as. In more than a decade's time, they were in and out of each other's lives, but while their physical presence wasn't consistent, there was never any doubt that all it would take was one phone call to bring them back into one another's orbit--a call that every single time Derek would make, Jordan would answer or return.

Derek and Jordan being together shouldn't make any sense—not with their very different upbringings and home lives, and certainly not physically or personality-wise—but somehow the connection they share is unmatched by anyone else they've ever been with. Derek's childhood and teenage years was nightmarish and its aftereffects have stayed with him even as a successful business owner. This was something that I would never have clued into when he was introduced in the Finley, and I truly did love getting to know him here, empathizing with his family struggles. Then there's Jordan, who may come off as this cocky, bossy man, but there's a great deal more to him as well. Ella Frank has a gift for introducing supporting characters who pique your interest, making you crave to know them better. I don't know who's up next—there's Dylan Prescott, Derek's roommate and friend, and August, Jordan's friend and occasional hook-up—but whether one or both of them get a book, together or separately, I'm already highly anticipating it.

If you go into this thinking this is another teacher-student romance, just like the book before it in the series, prepare to be utterly disappointed but in the best way possible. Yes, Derek and Jordan meet while Derek is Jordan's student, but there's so much more about the history of their relationship than how they first entered each other's lives. This separates itself from its predecessor, Finley, while still keeping the connection to Finn and Brantley's story intact. So, can you read this as a standalone, yes, but for you to really have that full reading experience that will give you a better appreciation for the stories of both couples—and not just the romantic relationships but also the friendships between Derek and Finn and Jordan and Brantley—I'm strongly encouraging you to read the two books in order. I promise, they'll be more than worth the read. The Sunset Cove may still be an ongoing one but I don't think it's too early for me to admit it's already an all-time favorite of mine. Five-plus stars for Derek and Jordan and Devil's Kiss. ♥

Read my reviews for the Sunset Cove series: