Review: Leave the Night On by Laura Trentham (Cottonbloom #4) 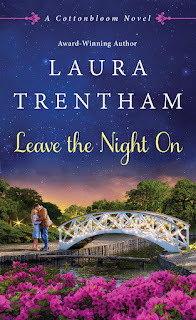 One of my favorite series from 2016 is back, and Laura Trentham proves once again why she's my go-to author when it comes to small-town romance. Leave the Night On is the fourth full-length novel and the sixth addition to the Cottonbloom series, which is set in both Mississippi and Louisiana. The town of Cottonbloom is separated physically by the Mississippi River as well as by the preconceived notions people have about the more upper-crust townsfolk who live in Mississippi and the far more salt-of-the-earth citizens over on the Louisiana side. With the Fournette siblings getting their stories told in the first three novels, Trentham is giving readers a whole new set of siblings to fall in love with: the Abbott brothers. I'm not entirely sure if all four--Mack, Ford, and twins Jackson and Wyatt--will be getting their own books, especially since, after having read this book, I don't think Ford is all that worthy of the honor. Of course, he may change my mind if he bothers to change his ways as the series progresses. The first among them to bask in the limelight is the youngest, Wyatt, who'll be followed by Jackson early next year.

Owning a quarter of Abbott Brothers Garage and Restoration allowed twenty-nine mechanic Wyatt to do the one thing he loves--work on cars. He and his two brothers, Mack and his twin Jackson, were good at what they did. Their other brother Ford preferred to not get his hands dirty, choosing instead to make connections with would-be customers. At least that's what he claimed he was doing on the Mississippi side of their hometown of Cottonbloom. When one of that side's residents shows up to their garage with a Camaro meant to be restored for her fiancé, it was supposed to be a good way for the business to make a fair amount of money and get their name out there. However, all it took was one misplaced piece of underwear to get Sutton Mize questioning the loyalty of the man she's set to marry. To make matters worse, the person he's cheating on her with is none other than her best friend. So, what's a girl like Sutton to do? Have her fiancé think that she's got someone on the side as well, and Wyatt happily obliges. While the relationship may be pretend, the passion isn't, but can Sutton afford to entrust her heart on Wyatt, a man who could very well see her as nothing more than a new pity project to take on?

There's a part of me that sees this new set of books as a spin-off of sorts, although I know that the series has actually been extended. Maybe it's because this involves a different set of siblings. But then, it doesn't really matter if it is a spin-off or not; what matters is that the author has taken this familiar backdrop and dropped in a new cast of main characters--though we do get glimpses of the Fournette clan plus several memorable Cottonbloom residents we've encountered before in this fourth novel--and an interesting story arc involving brothers working together in one garage. Wyatt and Sutton had the whole Louisiana guy and Mississippi gal thing down pat. Though I confess that I've never been a fan of the fake relationship trope, Trentham more than managed to keep my attention, thanks to an honest-to-goodness desire to have these two people who were well-suited for each other to get their happily-ever-after. There's a point in the story where I seriously wanted to give Sutton a good talking to, but the woman did come to her senses. Can I also say that the epilogue had me grinning like a madwoman? Too cute! I'm curious to see how other non-Abbott characters will be utilized as the series moves forward and how the whole drama involving Ford will play out. I'm giving Leave the Night On five out of five stars. ♥

Pre-order Leave the Night On on Amazon | B&N | iBooks | Kobo.