Review: Then He Kissed Me by Laura Trentham (Cottonbloom #2) 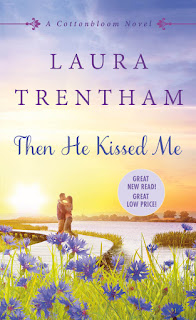 He took a swift, shallow breath. His chest seemed to move faster.

She laid a hand over his heart. "Do you need your inhaler?"

A smile crested his face, and he took a deep shuddery breath. "My asthma is not what's stealing my breath. You're so unbelievably beautiful. Will you take your braid out?"

Tears burned up her eyes. She tiled her head back, letting gravity pull them back down. Was she seriously teary because he'd spouted romantic nonsense? She blinked. Dangit, that's exactly why she was teary. It was a foregone conclusion, she was officially a sappy romantic.

Who do I go to if I want to bestow a title on an author? Because with each new book this woman gifts to her fans and readers, the more I'm convinced that Laura Trentham is a small town romance writing genius. Or do you think "queen of small town romances" works better? I kid you not, people. This is the fifth novel of hers that I've had the pleasure of reading and reviewing and she's just able to weave together story after story that, within its seeming simplicity, is layered with the kind of complexities that keep you turning the page and then creates these multi-dimensional characters that invite us to go on their journey with them and make us fall in love with them and their story. With her newest series, which shares its name with the town its set in, she's given us Cottonbloom and its quirky residents. The state line that divides the town into the Mississippi side and the Louisiana side may seem inconsequential to some, with a footbridge now connecting either side, but to two ten-year-old children, the distance must have seemed insurmountable.

Then He Kissed Me is the second novel in the Cottonbloom series from author Laura Trentham and is about two best friends who were there for each other for years, but when they were dealt cruel fates as ten-year-olds–one having lost his mother to cancer and the other having her parents snatched from her because of a car accident–they had no choice but to go their separate ways, with Nash Hawthorne moving to Mississippi with his aunt while Tallulah Fournette remained in Louisiana with her brothers. Eighteen years later, Nash has returned to his hometown after having received his PhD and spent time in Scotland. Seeking out his childhood best friend goes without saying, but the girl he once knew has become wary and closed-off. The surprise, however, isn't limited on just his part because Tally takes one look at Nash and can tell that her nerdy best friend has grown up to be a man that women must be lusting over. Parts of the children they once were still remain, but will these two forge a new friendship or dusting off the old one?

Tally can't help but feel utterly inadequate when she notes of how well-read and intelligent Nash is. Her dyslexia made it difficult for her as a student, having barely graduated from high school and refusing to continue on to college. There's no denying that the crush she once had for Nash has become something more potent nearly two decades later, but there's no competing with the women that Nash's aunt, who has never hidden her dislike for Tally and her general distaste for the Fournette family, pairs him up with or those who have no qualms coming up to him time and again. He may claim to want to be with her now, but Tally has had enough experience to know that, sooner or later, Nash is going to leave. Whether its to a university more prestigious than Cottonbloom's local college or a more worldly woman, Tally doesn't see herself as enough to hold on to him. She doesn't want to lose the friendship they've rekindled, but the more Nash insists on remaining a part of her life, the more Tally finds herself risking her battered heart.

This story was like a hybrid of two of my favorite tropes: second chances and friends to lovers. The second chance isn't romantic in nature, since both Tally and Nash were mere children when circumstances led them on opposite sides of the Mississippi River, but the kinship these two shared was the most important relationship they had at the time, so the loss of the love, support, acceptance, and understanding the other provided was devastating, possibly setting them on very different courses had they stayed friends. As adults, they have the unique opportunity to try and see if the friendship that once existed can be brought back, but this time, the added element of mutual attraction makes for interesting interplay between Nash and Tally. The friends to lovers part is pretty clear, since these two do become friends once again and with all the more lustful and romantic stuff thrown into mix, reading about how they decide to either pursue something more or stick to the status quo makes for grin-inducing and giggle-bubbling reading on my end.

I loved Tally and Nash and there were moments that I so wanted to give Tally a hug because the girl seemed to need to be reminded that she was not alone–she never really had been nor will she ever be. She locked herself away and kept her insecurities and learning disability make her feel as if she was inferior and wasn't a worthwhile person to be around. We've all allowed our insecurities to get the better of us at least once in our lives so empathizing with Tally isn't a hardship. And then there's dear Nash, who won my heart from the minute he wheezed and tried to not reach for his inhaler. Being the lifelong asthmatic that I am, I was tempted to suggest that he give swimming a try. His asthma plus the fact that he wore glasses and loved Star Wars and was as much of a book hoarder as I was made me adore him even more. Weird combo, I know, but I tend to gravitate towards characters who have that bit of quirkiness in them. There wasn't anything I didn't love about Then He Kissed Me, so naturally, this 2016 favorite gets five-plus stars. ♥

Purchase Then He Kissed Me on Amazon | B&N | Kobo.