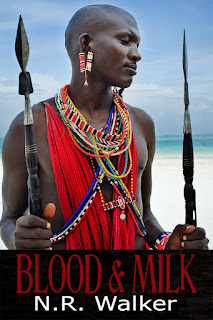 We never spoke about it. We never questioned it. I couldn't afford to: he was my only comfort, and it would seem I was his only comfort too. In a world that turned without me, Damu was my fixed point. He was the only shining light I'd had in twelve months of empty darkness.

I used to tell my preschool students that reading a book is like opening the door to a new world that's waiting to be explored. Reading Blood & Milk, N.R. Walker's standalone M/M romance set in Tanzania, did exactly that--it gave me a world I knew only a handful of facts and figures about and brought it to life with prose that evoked imagery that was both enthralling and daunting and a variety of emotions. This was an awe-inspiring story of one man's journey, one that led him to a nation as far-flung and as foreign in its mores as his home country of Australia. Heath Crowley wanted to live with the Maasai and learn their ways, but his exposure and experience with this tribe at large and with his assigned companion, Damu Nkorisa, in particular is what has Heath yearning to live once again after a devastating loss left him adrift.

It was a dream that led Heath Crowley to take the hours-long flight from Australia to Tanzania and to immerse himself in the way of living of Maasai tribe. The kind of life he once had was one he no longer felt was worth living, not after the loss of the person he loved most. The tribe leader looks upon Heath and his heterochromia and his ability to dream about things that are yet to happen and welcomes him, albeit not with open arms. He is to live with Damu, one of the tribe leader's sons, who is treated almost as much of an outsider as Heath himself. He is given the name of Alé, meaning "milk", due to his pale skin, and in his time there, Heath is forgotten. The differences between his life in Australia and how the Maasai live is striking and sometimes makes little sense to Heath, but it is Damu who unexpectedly centers him each day.

Damu has known no other life except for the one he lives with his people. The arrival of a pale-skinned foreigner has him put in the role of babysitter, a role that Damu readily accepts with nary a complaint. He is used to doing what is required of him, knowing that he will never be the warrior that his older brother is. Damu teaches Alé the Maasai way of life, answering seemingly endless questions and quelling his new friend's curiosity. But Damu, too, is curious, and the more time he spends with Alé, the more he finds himself at odds with what he thinks he knows and everything else he has no idea about. He's drawn to Alé, but they are both men and while Damu may not be allowed to marry a woman or have family due to their custom, the want--the need--to be with another man is a dishonorable act, one that'll cost them their lives.

Gah! This is only my fourth N.R. Walker book--the first three being her recent Spencer Cohen trilogy--but the woman is undoubtedly a gifted storyteller. I was so fully absorbed in Heath and Damu's story that I couldn't really be bothered to do anything else. Damu's world feels as if it's frozen in time, his people not eager to embrace the ways of those surrounded by modern conveniences, but reality has often dictated that time waits for no one and the same goes for those groups of indigenous people in almost any country. They're forced to adjust to the demands of those who deem themselves more civilized. I've seen it here in my own country and I've read and heard about similar situations in many others. And this book has made me stop yet again and question why we think we're so much better than the dwindling number of "natives".

Civility is something we seem to believe comes with the finery we drape ourselves with or in the stone walls of the places we live in. But this novel has reminded me that civility is not necessarily something you have simply because cover yourself in yards of fabric or live in a secure abode to hide yourself from the world. We all know of at least one person who may look as if they own the world but treat it and other inhabitants with disregard, disrespect, or disgust. There is no written or unsaid guarantee that states we are free from barbaric actions and reactions just because of where we live, what we believe in, or who we interact with. Blood & Milk reiterates that we find the person we truly are and the home we seek within ourselves and with those we choose to share all of it with. This is one of my 2016 favorites. Five-plus stars. ♥