Review: Say You'll Stay by Corinne Michaels (Return to Me #1) 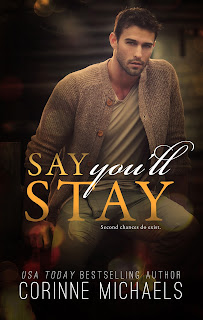 
There's something about reading adult contemporary romance stories that has a distinct appeal to a reader like me. Maybe it's because the main characters are far closer to my age than, say, characters in a young adult or new adult story. That doesn't me, though, that I don't enjoy reading books in either one of those romance sub-genres, because I do. I read a lot of books and they're not all romance in nature. But yes, I admit that romance is my go-to genre, and romances that have characters in their 30s or 40s click with me a bit more because that's where I'm at right now. With so many of the books I've been reading and reviewing having characters who are in their 20s or even younger, it's so freaking fantastic to come across a book that I can relate to, but so much more when it isn't just about the age of the characters we're talking about. And if there's anyone who's quickly becoming a go-to author when it comes to adult contemporary romance, it's none other than Corinne Michaels because this fab woman writes with her and for my heart.

Say You'll Stay is the first novel in Corinne Michaels's brand new series and it's a second chance romance between Presley Townsend and Zachary Hennington, two people who were very much in love and had dreams, one of which was to start a life together, only to have some of those same dreams drive them apart. At twelve and fifteen, Pres and Zach fell in love with each other, and their town of Bell Buckle knew they were soul mates who were meant to be together. Until they weren't. Not after Zach chose to sign to play professional baseball and Pres decided to stay in the college they were at together. With hearts broken, they went on with their lives. Seventeen years later, Presley is happily married to Todd Benson, the same man who picked up the broken pieces and helped filled the gaps that Zachary left behind. With their twin boys, life is perfect. Until it isn't. Shattered once again, Pres returns to the one place she swore she'd never return to, and it's in Bell Buckle that she sees the one person she hoped she'd never see again.

This book has angst and drama but it's also got lots of lighter moments interspersed. Presley and Zachary are one of those couples that people took one look at and knew they were meant to be. But life doesn't always work according to the script other people have penned for themselves. Pres and Zach go their separate ways, and yes, they do mourn the love that they thought would sustain them forever, but see, they don't spend a decade pining for each other. Thankfully, they actually do have lives and they're actually good lives to lead. They learn to love again and re-work the dreams they once thought they would fulfill together to newer ones with different people. But fate can sometimes be cruel and Presley and Zachary are thrust into each other's lives once again. She still hates him and he wishes he could hate her, but the love? Yeah, it's still very much there. Underneath the pain and the misery they once brought each other when they broke up, no one has ever come close to making either one feel the way they do together.

I liked that the negative feelings were there. It made the story feel far more real than had the author chosen to have them click right off. That doesn't mean that the feelings of love aren't there. They are, but it's not as simple as it was when they were teenagers. She's thirty-five and has two children to think of. He's thirty-eight and has a long-term girlfriend when the love of his life returns to Bell Buckle. There's more going on than I can share with all of you who have yet to read the novel. I don't want to spoil it for everyone, but that first chapter sets things into motion and then everything is revealed before Presley is left with no choice but to go back home. There's also another unexpected shock waiting later in the book, and talk about one heck of a heartbreaking revelation. Suffice it to say that Presley and Zachary will have to earn their respective ways back to each other's hearts because nothing is as simple or as easy as it may seem when it comes to their love story...but in the end, it's all worth it. Say You'll Stay receives five stars. ♥