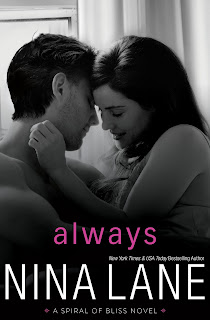 And in that moment, I know the truth that is as pure and holy as a prayer. The truth that began as a seed in a university registrar's office and has since flourished and bloomed into the now of Live and Dean.

Nothing, nothing—no disease, no misfortune, no evil—will ever have power over us. We are so much stronger than any monster.

Nina Lane owes me a box of tissues. I discovered her Spiral of Bliss series in February of this year and based on the four full-length novels (Arouse, Allure, Awaken, and Adore) and free novella (Arrive), all of which I read one of the other, this collection joins the ranks of my all-time favorites. And then she springs the fifth and final full-length novel, Always, on fans and readers and it was such a gut-wrenchingly emotional read. I can only wish that all series ended with the perfection showcased in this book. The writing was exquisite, with the author taking readers on the final stretch of Dean and Liv West's journey--at least the journey that this husband and wife are sharing with everyone else. From their first destined meeting on campus to their challenges and triumphs as a couple, we've been a witness to it all. With this last novel, they face their most formidable foe, and as they're tested to their limits as husband and wife, as parents, and as friends, they'll realize that they'll have to fight together in order to win the ultimate battle.

I won't go into detail about what the book is about or what exactly it is Dean and Liv are forced to face. Suffice it to say that it not only tests their resolve as individuals, but their patience and understanding as a couple. This story could have gone the way of tried and tested tales in the past--a number of which are quite good--but Nina Lane isn't your ordinary writer. She puts this much-loved couple--and readers and fans alike--through the wringer, seeing how far we're all willing to go and what exactly it may take to break us. You see, what Dean and Live experience in this novel isn't limited to just one event, nor is it a short term thing either. We see the ramifications in their relationship and in their relationships with the people around them. Not everyone deals with what goes on the same way, and I'm glad that this was how the story was presented. We all react differently and we all have varying reasons for our actions and reactions. The key thing to remember in this novel is that these characters are human; they're fallible but not unfeeling.

This review opened with me saying that tissues were owed because there were tears and in more than one part of the book. There were three specific moments in this story where I couldn't stop myself from crying even if I wanted to, what with the poignancy of those three separate times. The first one involved Olivia West and Kelsey March, the second Dean and Archer West, and the final one between Liv and Allie Lyons. Now, you may be wondering why none between Liv and Dean. Well, tears were shed but with all the crying going on because of these two--whether together or separately--let's just say that it's more of a collective thing instead of individual moments. This book isn't limited to just Dean and Liv's love story. This was about the love shared by brothers and how it can bridge a thirty-year gap. This was also about the love between friends and how not every friend shows how much you mean to them in the same way. Always is about love in all its forms and about being right there for someone. I loved every bit of it. Five-plus stars. ♥

Read my reviews for the Spiral of Bliss series: