June 17, 2016
One of my favorite authors is releasing a new standalone next week! N.R. Walker is giving fans and readers a book that I feel is worth reading and I know what I'm talking about because I was fortunate enough to have read the book in advance. So, go and pre-order Blood & Milk. You won't regret it! 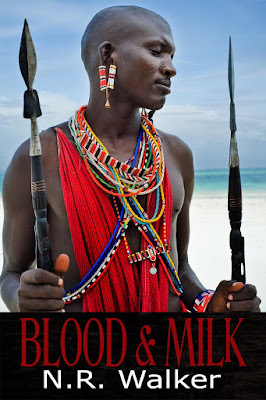 About Blood & Milk
Heath Crowley is an Australian man, born with two different coloured eyes and the gift—or curse—of having premonition dreams. He also has nothing left to live for. Twelve months after having his life upended, his dreams tell him where he needs to be. So with nothing―and no one―to keep him in Sydney, he simply boards a plane for Tanzania. Not caring if he lives or dies, Heath walks into a tribe of Maasai and asks to stay. Granted permission, he leaves behind the name and heartbreak of Heath and starts over with the new Maasai name of Alé.

From the day of his birth, Damu has always been an outcast. The son of the chief and brother to the great warrior leader, Damu is reminded constantly that he’s not good enough to be considered a man in the eyes of his people. Ordered to take responsibility for Alé, Damu shares with him the ways of the Maasai, just as Alé shares with Damu the world outside the acacia thorn fence. But it’s more than just a cultural exchange. It’s about trust and acceptance, finding themselves, and a true sense of purpose.

Under the African sky on the plains of the Serengeti, Heath finds more than just a reason to live. He finds a man like no other, and a reason to love. 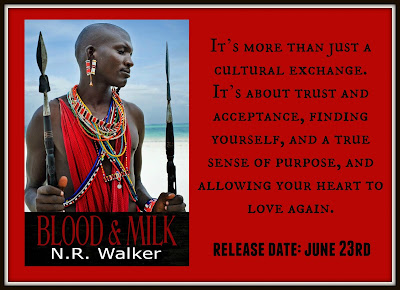 An Excerpt from Blood & Milk
Prologue

It was twelve months on. A full year had passed, yet my world had stopped completely. The men who stole my life were charged and would serve time for their crime. No one called it a hate crime, but that’s what it was. If I was expecting some sort of finality to come with the court findings, I didn’t get it.

I was also awarded damages, civilian victim and medical.

My mother came along for the final hearing, though I could only guess why. I had barely spoken two words to her in the last year. Maybe she came so she could vie for the sympathy card with her friends. Or maybe she thought she could have one last twist of the knife…

“Now it’s all over,” she said, nodding her head like her words were wise and final. “You can put all this homosexual nonsense behind you.”

I looked at my mother and smiled. I fucking smiled. I raged inside with a fury to burn the world, and maybe she saw something in my eyes―maybe it was a ferocity she’d never seen before, maybe it was madness―and my words were whisper quiet.

“You are a despicable, bitter human being, and you are a disgrace to mothers everywhere. So, when you go to your church group, instead of praying for my soul, you should be praying for yours. You have only hate and judgement in your heart, and you are doomed to an eternity in hell.” I leaned in close and sneered at her. “And I hope you fucking burn.” I stood up and stared down at her. She was pale and shocked, and I did not care. “If you think my words are cold and cruel,” I added, “I want you to know I learned them from you.”

I walked away, for the final time. I knew I’d never see her again, and I had made my peace with that.

He sat on our bed and grinned. I longed to hear his voice, just once. It’d been a year and I craved the sound of his voice, his touch. But when I reached out for him, even in my dream, as in my waking nightmares, he was gone. I sat up in our bed, reaching out for nothing but air. He was gone, really gone.

But in this dream, on the bed were he’d sat, was a plane ticket. Mr Heath Crowley, it said. One way ticket to Tanzania.

N.R. Walker is an Australian author, who loves her genre of gay romance.
She loves writing and spends far too much time doing it, but wouldn’t have it any other way.