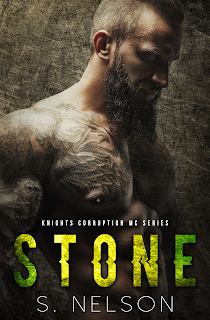 Note: This ARC was provided by The Next Step PR in exchange for an honest review.

From the first time I laid eyes on her, I knew she was gonna be mine. No matter how many times I was warned away from her, I persisted, defying all rational thought. I knew it was against the rules to be involved with family of another member, but try and tell that to my heart, mind, and...hell, I can't believe I was even thinking this but...my fucking soul.

Well now. Expectations set. Expectations not met. Why? Because expectations were frickin' surpassed. Marek is already on my list of top reads this 2016, and it set the bar impossibly high for the sequel, but author S. Nelson just gave us a book that was so not what I was expecting but was what I was hoping for without my knowing it. Stone is about Lincoln "Stone" Crosswell, VP of the Knights Corruption motorcycle club and a man known for his inability to feel pain, and Adelaide "Addy" Reins, a registered nurse and the woman who can't seem to resist the biker that makes her crave his touch and has her heart beating faster each time he's near. His jealousy and volatile temper make it difficult for Addy to even consider the possibility of being in an actual relationship with Stone, and she believes that breaking things off is what's best for her in the long run. But in the middle of her struggles with her feelings for him, Addy may need Stone by her side, especially when fate decides to hand her two extremely life-changing events.

Twenty-six-year-old Addy Reins knows that the right thing to do would be to end her non-relationship with twenty-seven-year-old Stone Crosswell. She doesn't know how much more of his temper she can take, especially when it begins to bring harm on innocent people in her life. Try as she might, Stone can't seem to understand why she isn't comfortable with his jealousy or his habit of reacting to everything in the extreme when it comes to men who are within her vicinity. But Stone knows how men think and he's sure that men who look too long at, get too close to, and hang out too often with Addy want only one thing: to do exactly what he does with her on a regular basis. He would love nothing more than to take their relationship public and make it clear to everyone that Addy is his and no one else's, but life in the MC is something Addy has never been comfortable with, and with Stone, the MC always comes first. Can Addy and Stone find middle ground or will a couple of revelations push them further apart or closer together?

Stone and Addy's non-relationship was hinted at in the first book, Marek, and now we get a ringside seat to just how complicated it is. Addy being the niece of a brother in the MC may be part of the reason why they've kept everything hush-hush, but there's more to it than that, with Addy feeling that the ins and outs of the club are things she cannot completely fathom or find totally acceptable. There's no doubting the passion these two have for each other, but your heart does break for them, what with Stone wanting nothing more than to ride on his bike all over town and shout that Addy is his woman and Addy loving Stone as much as she does but not being able to deal with his possessiveness and temper tantrums. I did find it funny, however, that these two thought they were fooling everyone else by pretending there was nothing going on between them. Hello? That chemistry of theirs is palpable and that sexual tension must have been, not just observed but felt by whoever happened to be around the two of them in the clubhouse.

I mentioned in the first part of my review that this story is nothing like I was expecting and that's a good thing. Most of the book really is about Stone and Addy's love story and the challenges that they have to face as a couple, but that story arc regarding the rivalry between the Knights Corruption and the Savage Reapers remains, as well as the one involving the drug cartel and Sully Marek, formerly Sully Brooks, daughter of the Savage Reapers president. This sequel doesn't have the violence and abuse that the first one had, and that's just one of the things that makes this different. But for all the differences story-wise between the two books, the quality of the writing and storytelling from S. Nelson is still as on-point as ever, and merely two books in, the Knights Corruption MC has already become one of my all-time favorite MC romance series. It's also got a lot of potential going forward, with MC members who already seem to be demanding their own shot at telling their stories, with Jagger's up next. I'm giving Stone five-plus stars. ♥