Review: His by Brenda Rothert 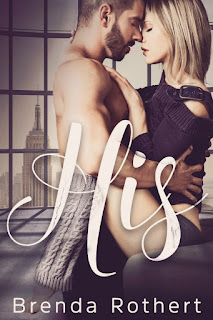 His is a standalone contemporary romance novel penned by author Brenda Rothert and has elements of suspense and mystery added to the mix. It has an interesting premise that involves twenty-eight-year-old Andrew Wentworth, both a young man who has made a name, a reputation, and a great deal of money on his expertise as well as having been born into a wealthy family, and Quinn Bradley, a twenty-one-year-old homeless girl who does whatever is necessary to keep both herself and her younger sister Bethy safe from either the natural or the unsavory elements on the streets of New York and to remain hidden from those who are after them. Andrew and Quinn's story is unconventional but it makes for a rather intriguing one.

A multimillionaire and a street rat may not seem to have a great deal in common, but from the moment Quinn agrees to spend one night with Andrew for $500 and they meet, Andrew's curiosity when it comes to beautiful young woman has him asking her for six months together. The two of them have their secrets and neither one is as forthcoming as the other would prefer. But the attraction? It's there and continues to build with each passing day they live under the same roof. Neither turns out to be wholly what they first thought of each other, and as their feelings begin to feel like much more and truths are revealed, they will have to choose between learning to trust and holding on or to succumb to their fears and let each other go.

The first half of the book tended to drag, with Quinn and Andrew's non-relationship limited to nothing more than conversations and times spent together during meals. While this is meant to be the time for them to build a bridge that connects them--and there are quite a few things that they do share in common--it just felt like the same thing over and over again. He would go to work, she would go to the library, they'd have dinner together. Wash. Rinse. Repeat. There were more interesting moments that peppered that first half, but not enough that I would really consider it a page-turner. If I'm being honest here, I was tempted more than once to skim through, simply so I could finally get to something of more consequence.

Now, that second half was much quicker in terms of pacing and Quinn and Andrew developed as individual characters and as a couple. There's also far more intrigue because we find out what it is that Andrew and Quinn have been hiding. While it was pretty easy to figure out what Quinn and her sister were running from, Andrew's was surprising and that was borne out of the fact that there wasn't any sort of hint as to what he had been doing and that it was fourteen years after what happened in 2001. This second half had me loving Quinn and Andrew together and I enjoyed their relationship and how they became each other's greatest ally. I'd give the first half three stars, the second half five stars, so an average of four stars for His. ♥

Purchase His on Amazon | B&N.