Review: The Hardest Fall by Christina Lee (Roadmap to Your Heart #3) 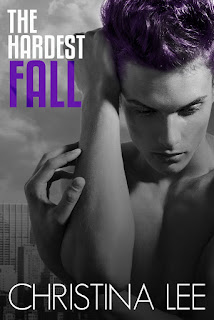 I'm not sorry I met you—because you opened up a part of me that had apparently been on lockdown. Thank you for that.

I'm sorry I allowed things to get as far as they did because I'm afraid I've wrecked you. And you hate me.

I'm also afraid I'll never be able to get the feel of your lips against mine out of my head again.


Whenever I'm about to read a story that I've never come across before, there's this mix of anticipation and apprehension that I feel thrumming through my veins. Am I going to love the tale that'll be unfolding before me? Am I going to be weirded out by something that may not automatically click with me? Funnily, it's not as if I've never come across a story about a person in drag before. M. Butterfly, anyone? But The Hardest Fall is different and in the best way possible. I've loved every single one of Christina Lee's books, and while the two that top the list remain firmly in their spots, this third and latest in her ongoing Roadmap to Your Heart series, which is a collection of standalone—though very lightly interconnected—M/M romance novels, comes close and now sits comfortably behind those two books. With a lighthearted story about two men who find friendship and love in the unlikeliest of circumstances and with someone neither one of them would have ever considered could become such an essential part of their very being.

Tate Sullivan is twenty-five and is finally comfortable in his own skin...and that of his onstage persona, Freida Love. He refuses to hide who he is for anyone. Twice was more than enough, thank you very much. He isn't desperately trying to become part of a relationship with any man either, no matter how much his chest tightens with some unnamed emotion—cough*longing*cough—when he sees his friends happily coupled with their significant others. He's okay with hooking up, because one time is all he needs with a guy. But there's a new regular patron that he can't help but look for whenever he performs as Freida. He's nicknamed him "Dark Eyes" and its those very eyes that seem to take note of every single thing Freida does while on stage. The guy, with his crisp, buttoned up shirts and tailored pants is clearly straight, while Tate clearly...isn't. But Tate is believed to have a thing for straight guys and he's been known to turn one or two or more. Is Dark Eyes attracted to made-up, sequined Freida only or could Tate capture his attention too?

Before he died, Sebastian Clark's best friend asked him to find a manila envelope and to destroy it. The contents of that envelope surprised Sebastian, who was clearly unaware of the deception a man he considered his closest friend was capable of. He was married and had an affair with a drag queen, but there appeared to be stronger feelings involved. Sebastian decides to make it his mission to find Freida Love but in the process, becomes curious about the man behind the make-up and other paraphernalia that were part of his transformation each night. He's fascinated by Freida, but it's Tate that he wants to get to know, and when they strike a kinship brought about by stilted conversation and a desire to help the homeless, the confusion that's been swirling within Sebastian becomes even more difficult to shove to the side. Sebastian has always been straight...right? He's never even been with another man before. He's beguiled by Tate, but can Sebastian afford to start something when he hasn't been 100% honest with him?

Whatever ideas I had about where this story was headed went out the window by the time I was a couple of pages into it. There is so much more to Sebastian and Tate than meets the eye and, I think, to a certain degree, they're still in the middle of finding the person that they're meant to be. Reading about how they move from being nothing more than nameless strangers who are entranced with each other in the beginning to hesitant friends and then enamored lovers made for an engrossing experience. Having to deal with their respective issues led to some thought-provoking musings on my part, wondering what I would do in either man's situation. There's something utterly irresistible about Sebastian and Tate and there was absolutely nothing that could have forced my attention away from either one of them or their story. This was a lighthearted and touching story about acceptance—both of oneself and the person they love—and moving forward together with love, respect, and honesty. The Hardest Fall gets five-plus stars. ♥

The Darkest Flame (book one) - five-plus stars - My Review