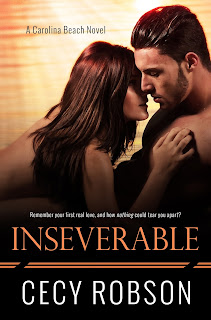 I have discovered yet another author this year and again, I find myself scratching my head wondering where the hell I've been all this time because Cecy Robson has a rather formidable back list that I'm going to have to get through. But I'm getting ahead of myself. This review is about her latest release and the first book in her Carolina Beach series, Inseverable. This is the heartrending story of an Army veteran named Callahan Sawyer, who I'm guessing is about twenty-six since he enlisted in his senior year of high school and had to enter boot camp on the day of his graduation and went on to serve eight years as an sniper with the Rangers. His last tour left him with even more shadows and nightmares that haunt him and he wants nothing else than to be left alone. He hopes to find solitude in the beach cottage in Kiawah, South Carolina left to him by his uncle, but those die quickly when Trinity Summers, a college graduate and lifeguard, sets her sights on him. Can a soldier from Texas and a southern belle form inseverable ties over the summer?

Trinity Summers and her four best friends are enjoying their last summer together before they all go their separate ways, with varying pursuits after college. She's already signed up to join the Peace Corps wherever they assign her in a couple of months' time. She never planned to meet a brooding man with countless demons that he prefers to deal with in silence. He scowls and makes it clear that her presence is annoying him to no end, but Trinity makes it her quest to make Callahan Sawyer smile. She disrupts his routine, and while Callahan doesn't do perky, there's something about Trinity's persistence and sunny disposition that chips away at his hard exterior. Neither one was expecting to fall for the other, but fall they do, and the summer proves to be even more memorable than Trinity could have ever hoped for. Callahan begins to trust her and sees her as his light and his home. But Trinity hasn't told Callahan about her Peace Corps plans. With a love is intense as theirs, will it all come to an end when summer does too?

Okay, I could so relate to Callahan. I like my solitude and I am not a fan of perkiness in whatever shape or form. So clearly, there were times that I found Trinity a bit grating in the first half of the book. Later on, though, when we see the very heart of this young twenty-something (I'm thinking she must be twenty-two or twenty-three since she just graduated from Princeton and is about to talk her board exams), Trinity proves to be more than the girl with the perma-smile who wants everyone to bask in the same sunshiny aura that seems to surround her. Her feelings for Callahan (who I wish had a nickname) were deep and she was fully invested in him, not merely because she saw him as a broken man who need fixing but because she saw beyond the brokenness and yet wanted to be with him in spite of it. Callahan is stoic and silent but I loved seeing how he opened himself up to not just Trinity but to her friends and family as well. The two of them become so inseparable that when the inevitable comes around, your heart breaks for both lovers.

There were moments in this story that I found myself snickering and those were mostly courtesy of Trinity and her band of quirky best friends. I'm not sure if the series will include all these four other friends, with two already hinted at being paired together and that's definitely the one I'm looking forward to next in the series, but I'm certainly going to hope so. Each one proved to be memorable and the bond they shared with Trinity was both touching and fun to read about and how they welcomed Callahan into their circle seemed so natural and unquestionable. Then there's also Trinity brother Landon, who clearly needs to acquire better taste when it comes to women, so I hope he also gets his story told later on in the series. All in all, I find myself engrossed in the story and how Trinity and Callahan would develop their weird pseudo courtship into a real relationship. I would have liked a bit more delving into Callahan's family background, but I'm still a highly satisfied reader and am excited to read the rest of the series. 4.5 stars for Inseverable. ♥