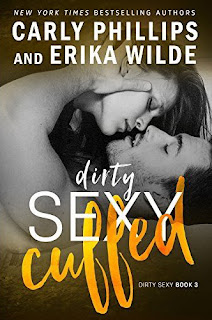 The quiet, law-abiding, law-enforcing Kincaid brother has a dirty side and it's told in only the way Carly Phillips and Erika Wilde can in Dirty Sexy Cuffed, the third and originally thought to be final book in the Dirty Sexy series (but I'll get to the "final" book thing in the last part of my review). Levi Kincaid, the youngest among the triumvirate of bad boy brothers, served as an officer in the military police while in the Army and went on to become a police officer in his hometown of Chicago. Just like his two older brothers, Clay and Mason, Levi has no problems attracting women, though he tends to be more selective, making sure that whoever he ends up taking to bed knows exactly what it is they're in store for when they're with him. You see, Levi likes to be in control, both inside and outside of the bedroom, but while everyone can recognize the former, it's the latter that he doesn't divulge unless he's interested in someone. The someone who's captured and held his attention for weeks is a shy convenience store clerk, Sarah Robins.

Sarah is counting her cash and counting the days. She needs to save enough money to get out of Chicago, and the sooner the better. Unfortunately, her job at the convenience store isn't exactly the kind that will have her rolling in dough right away. So, she scrimps and saves every single cent she can. The farther she can get away from her controlling ex, the safer she'll feel. She can't afford to be distracted, even if that distraction happens to be her frequent customer, Levi Kincaid. He's asked her on a date on a regular enough basis that she anticipates it, which is also why he's no longer surprised when she turns him down. It's not that she isn't attracted to him. She simply can't become involved with someone, and Levi is the kind of man that she knows she won't be able to get enough of. When he rescues her from a would-be robber, Sarah finally agrees to go out with him. But what starts out as nothing more than a one-time date spirals into more. Together, Levi and Sarah are downright dirty and sexy, but Sarah's secret past is still lurking...

Ah, the Brothers Kincaid! These men are hot, but though they all share the hotness gene, their stories are different, even when it comes to how they've dealt with the years of neglect and abuse they endured for years. My curiosity about Levi simply grew with each passing book in the series, and when you learn what it was he went through as a child, your heart breaks for him. It's easy to understand why control is such a necessity for him, but when he meets Sarah, the realization that not everything can be controlled and wondering if he's willing to give up even a smidgen of it for her and under what circumstance. The story plays out really nicely, though I do admit that there was one particular moment that didn't quite make sense to me and it was because of how Levi chose to handle it, especially since he happens to be a law enforcement officer. Still, I enjoyed myself immensely and that epilogue makes it clear that the series isn't over quite yet. Yup, there's a fourth book, dirty, sexy readers! But first, read Dirty Sexy Cuffed. Five stars! ♥

Read my reviews for the Dirty Sexy series: