Review: To See You by Rachel Blaufeld 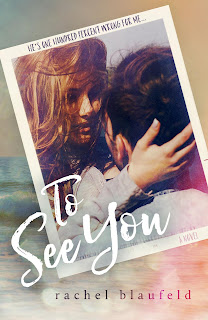 To See You is a contemporary standalone romance from one of my favorite go-to authors, Rachel Blaufeld, and with this newest release, she's given us a unique story about a woman who learns to see beyond a man's physical appearance and in turn, finds both love and a better version of herself. The second she sees who she's sitting beside on the flight from Chicago to New York, Charleston "Charli" Richards immediately judges him and labels him a "slob". He's overweight, a tad sweaty, and is a bit too chatty...but there's something about Layton Griffin. Maybe it's the fact that he's actually good looking and he's genuinely a nice guy. And from those few hours sitting side by side on a plane to exchanges via email, something develops. What that something is, neither can give a label to. But while Layton knows what it is he wants from Charli, she's unsure about what to do with her confusing feelings and thoughts. Layton is nothing like the man Charli should be with; so why does he make her feel like he could be her everything?

Charli and Layton shouldn't make sense together, a fact that escapes neither one of them. And that's what this book is about. We have two people who, for all intents and purposes, don't fit within the supposed list of pre-requisites that society thinks would be right for either of them. They're wrong for each other. But who are we to say that they're wrong? What if Mr. Wrong was actually Mr. Right, except  he doesn't come in the packaging that's been set out for him? What if Miss Perfect turns out to be riddled with imperfections and is more tarnished on the inside than her shiny exterior may lead you to believe? Charli makes some rather bitchy judgments about Layton, but if we're being honest here, haven't most, if not all, people done the same thing at least once about a person they didn't know? It's easy to dislike Charli, but as the story progresses, it slowly becomes clear that the woman has her own share of insecurities, and before and after Layton's physical transformation, all those niggling insecurities were part of why she had doubts.

Relating to Layton was all too easy for me, having dealt with weight issues for more than half my life. Even the way he first started to lose weight was something I recognized because it happened without me realizing it a few years ago. You need to do it for yourself, not because people nag you about it or to get someone's attention. Beneath the extra weight, Layton was an honest-to-goodness good man. With the weight gone, would he be the same? After all, not having the weight for people to fixate on finally allowed those who were blind to pay attention to what mattered. I so loved Layton because he didn't have a mean bone in his body. Heck, I dare say that he was too damn nice, but from the beginning of this book, he was already irresistibly adorable, and by the time I finished reading, Layton Griffin joined the ranks of favorite book boyfriends. I think it's only fair to say that Charli's insecurities and that feeling of not being satisfied with life are familiar to many. To See You is one of my favorite new releases this week and gets five stars. ♥