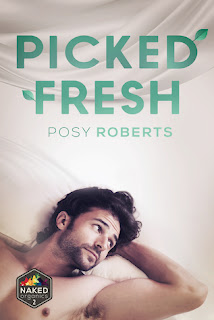 Picked Fresh is the second novel in the Naked Organics series from author Posy Roberts and picks up soon after the events in the first novel, Farm Fresh. On the heels of Jude Garrity finding a home and acceptance at the Kaleidoscope Gardens along with his own sexual awakening and the decision to become exclusive with Hudson Oliva, Hudson is preparing to return to Montana to see his mother--the same mother who, along with is father, rejected him because of his sexuality. Jude chooses to accompany him on the trip, knowing that balancing his remaining requirements before graduation while on the road won't be easy, but he refuses to let Hudson do this on his own. But soon, Jude has his own past with his family that he needs to deal with. Add to that receiving news about the future of the commune and Hudson still coming to terms with his feelings of jealousy, and Hudson and Jude journey to the past may determine both their present and their future. The question is, will Jude be by Hudson's side and belong to him only?

I admit that I went into the Naked Organics series with feelings of hesitance and anticipation, as is the case when it comes to themes or story lines I'm not all that familiar with. But with the two full-length novels and the prequel novella that I've just read, I think it's safe to say that I was not only entertained but found myself wanting to do a bit of research to see what living on a commune was all about. Now, being the kind of person who prefers solitude, I highly doubt I'd even consider becoming part of such an open community, and this is why I was so fascinated with Hudson and Jude and the rest of the cast of characters. Jude continues his journey of discovery here in this sequel, but this is more of Hudson's story, and how he has to deal with everything that he left behind and letting go of it all completely. His relationship with Jude progresses and evolves in book two, but so do his relationships with the other people in his life. The writing was crisp, the story original, making Picked Fresh a fresh four-starred pick. ♥