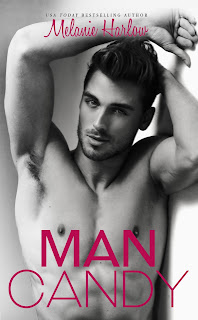 But first, I wanted to make her sweat a little.

Then I wanted to make her sweat a lot.


What is it with Melanie Harlow's male main characters that they make you wish upon every single star in the heavens for them to be real? Then there are her female main characters who have bits and pieces–or maybe even the whole package–that remind you of yourself or of someone you know. And what about her stories that are so damned irresistible to read and are almost always guaranteed to have you swooning and giggling like a school girl. We get all of that and more with the latest from the romantic comedy writing genius that is Melanie Harlow, a standalone aptly titled Man Candy, though I highly suspect that this is the first in a series about three best friends...or maybe that's me and my usual wishful thinking. Anyway, if you've read her past rom-com series, Frenched (which I have yet to read but already have in my e-reader) or Happy Crazy Love (which I have read and loved to bits), you'll know that what she gives fans and readers isn't regurgitated. If Man Candy were edible, I'd ask for extra servings and a take-out box or two.

A decade isn't long enough for Jaime Owens to have not been in the same breathing space as Quinn Rusek. The fact that he's now living in the flat under hers–no thanks to her brother Alex, who was Quinn's best friend before they went their separate ways for college–has her irritated. When he makes it clear that he hasn't forgotten her declaration of teenage love when she was seventeen and he was a year older and how he rejected not just her "I love you" but her offering herself to him, Jaime decides it would be best to avoid him during the month he'll be staying. But Quinn never wanted to hurt Jaime ten years ago and while he may have had his reasons, that spark that was there once is still very much alive. Now, he plans on making as much use of his second chance to not just be her friend but to show her that they would be good together. More than good. With Jaime not believing in romantic love lasting, however, Quinn has his worked cut out for him. But Quinn is more than up to the challenge and is ready to show Jaime love exists.

Cue swoony sighs! I loved this book. From the sometimes immature back and forth to the sexy banter and then the sexual tension interspersed with how effing sweet Quinn is plus songs from the Beatles, which is my all-time favorite band, especially I Will, and I was a goner. There were moments that the temptation to smack Jaime upside the head were strong, but let's face it, that rejection from Quinn ten years prior did a number on her, especially since he was the first guy she was ready to offer her heart to and the first one to break it by not taking it. But dear Quinn was so patient and understanding and just...just...gah! The guy was perfect! It's not fair that Melanie Harlow gives us these fictional men to drool over, but drool we do. Quinn was above and beyond, that ideal combination of naughty and nice. The idea that it's the girl who's the commitment-phobe isn't all that new, but the author added her own sassy touch to it, making this such a memorable story about Quinn and Jaime and about taking a chance to fall in love with the right person.

Now, if you know Melanie Harlow's books, you'll know that she never fails to provide an absolutely fab cast of characters for us to grow attached to, and this is why I can't help but think that this book is a series starter. Jaime has two best friends–Margot Lewiston and Claire French–who desperately need their own happily-ever-afters, Margot having just come out of a surprisingly dead-end relationship and Claire believing that true love exists but maybe not so much for her. I've got my fingers crossed for these two to get their stories told and since I'm already making my hopes and wishes public, I may as well go on and shoot for the moon by saying that I'm hoping Alex Owens and Nolan (who didn't have a last name mentioned...I think!) get a novella or short story about how they met and fell in love. So, with all that being said, I'm going to make another wish: for you to read Man Candy and see why I adore this latest 2016 favorite as much as I do. #FivePlusStars #Quinning #SweetPea #TheyWill #LoveBugs #MustRead ♥