Review: Into the Nothing by BT Urruela (Broken Outlaw #1) 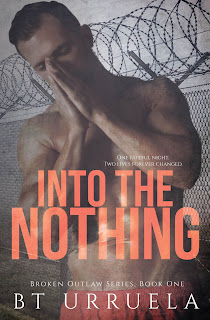 Into the Nothing is the series starter for Broken Outlaw and it's the debut solo release from author BT Urruela. It's a contemporary romance with a heavier mystery suspense element thrown in later in the book. The author released a co-written novel late last year, and I bought it when it went on sale recently but I have yet to read it, so this first book of his in his first ever series is my introduction to his writing. Overall, I was impressed with his ability to weave together a story about two broken people who find love, only to have it thrown to the wayside when the unthinkable happens, and then struggle to deal with the aftermath, unsure whether to hope that the truth will be uncovered and that love will rise and conquer all.

Twenty-seven-year-old Xander Evans has traveled from his hometown in Florida to various places along the East Coast, finding work to do but never really planting roots in a place that he can finally call "home". When he makes his way to Missouri, he locks eyes with twenty-four-year-old Paige Watson, who he rescues from a drunk's unwanted advances. To show his appreciation, Paige's father invites Xander to Truman Valley. From there, Xander is given work at Watson's Wineries and is embraced by Jack and Teresa and becomes an unofficial part of the family. His feelings for Paige are foreign to him as well, but as she begins to melt the icy wall around his heart, Xander is ill-prepared for the dangers lurking around.

Even if you go into this book blind, the story opens with Xander already having spent three years for the murder of Teresa Watson, the mother of the woman he loves. We're then taken back to how Xander and the Watsons meet and in the process, how he's able to become a part of their family and how he and Paige fall in love with each other. We also see that for all his chivalrous behavior when it comes to defending Paige, Xander has his own share of demons that he's saddled with. On the other hand, Paige has her own dark past, what with having stayed in an on-again, off-again relationship with her abusive boyfriend for years before she ended things. Though damaged, Paige and Xander find love and peace with one another.

That prologue grabs your attention from the get-go, and as the story unfolds, you see that not everyone or everything as what they seem. Xander tends to drink more than he should and he appears to have a bit of an anger management issues. Then there's Paige's family, who, for all intents and purposes is a close-knit one, except for Paige's brother, who is your typical, angsty teenager but with a way more pissed-off attitude than you think he should have. I would have wanted the author to delve a bit more into Xander's past as well as Paige's family dynamics. There's a fair amount that's offered up to readers, but not enough for someone like me to become as emotionally invested as I would have wanted to for a story such as this.

In the case of Teresa Watson's murder, I had three suspects, but there was always one that stood out more than the other two, and when it was revealed who the murderer was, I was proven right in my suspicions. The story was paced out well, especially when it came to the events in 2013, but when everything reverted back to 2016, it was as if we were suddenly in fast forward mode, and it felt rushed to a certain degree. The epilogue also left me hanging a bit, but with a feeling of hope as to what the future had in store for Xander and Paige. All in all, BT Urruela's new novel was good, and one that made for suitable weekend reading fare. I'm interested to read more to see where Broken Outlaw is headed. Into the Nothing gets four stars. ♥

Purchase Into the Nothing on Amazon | B&N | Kobo.