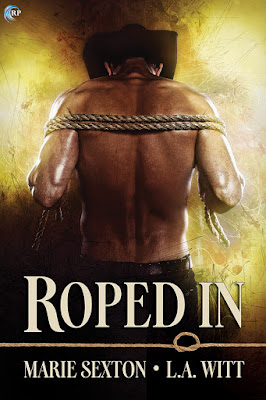 About Roped In
Graham and his roping partner, Jackson, have been friends since they were boys. They've ruled the rodeo scene for ten years running, but lately, Graham’s heart isn’t in the game. He’s tired of the bruises, the cowboy mentality, and the animal rights activists who picket every event. He's also tired of being in love with Jackson, and nothing’s been the same between them since their disastrous drunken encounter the year before.

Then Graham has a run-in with one of the rodeo protesters, and everything changes. Kaz is young, idealistic, and sexy as hell. But he's also a know-it-all, animal-loving vegan, bent on saving the world one cow at a time. They have next to nothing in common, but Graham can't stop thinking about what might happen if they can stop butting heads long enough to give it a try. Unfortunately, no matter how attracted Graham is to other men, he always panics and runs when the clothes start to come off. But Kaz has an idea for getting Graham past his nerves and into bed.

All they need is a bit of rope.

Note: This is a re-edited second edition of a previously published title.

Read my 3.5-starred review of Roped In.

Add Roped In on Goodreads.

About Marie Sexton and L.A. Witt

Marie Sexton lives in Colorado. She’s a fan of just about anything that involves muscular young men piling on top of each other. In particular, she loves the Denver Broncos and enjoys going to the games with her husband. Her imaginary friends often tag along.

Marie has one daughter, two cats, and one dog, all of whom seem bent on destroying what remains of her sanity. She loves them anyway.

Lori: We got along right from the start. It’s been so long, I honestly can’t recall what my first impression was. I do remember we’d corresponded a little bit online before I moved to Nebraska, and then I went to visit her on a whim. I had jacked up my wrist, so I couldn’t write, which meant my weekend was hosed. Her husband was out of town, so she was desperate for some grownup conversation. That led to “Hey, I could drive eight hours and we could hang out for the weekend! I really hope we, like, get along!” (Spoiler alert: We did.)

2. Are you guys planning to write a sequel to Roped In, especially since there's a clamor for it from fans of the book?

Marie: We've been planning a book for Jackson ever since we wrote Roped In, but we can't make any promises about when it will get done.

3. Who would among Graham, Kaz, and Jackson would you fuck, marry, and friend-zone? (This Q&A is a no-kill zone so no killing of characters!)

4. If you could choose one famous/infamous person you'd tie up and do naughty/torturous things to, who would it be and why?

Marie: Is this supposed to be sexy torture? Or like real-life, mean torture? If we're talking actual torture, I'd tie up Michael Vick and let some wild canines snack on him for a while. (Was that too gruesome?) If we're talking the sexy kind of torture, I guess I'd have to go with Chris Hemsworth. And if you have to ask why… I can't help you.

Lori: Oh, this would be a long list. I’d have to say Tom Hiddleston, but something tells me he’d prefer to reverse the roles.

5. If you had to swap places for a week, what word of advice would you give the other?

Marie to Lori: The best way to get the child to stop talking is to hand her ice cream.

6. Who do you think between the two of you would make a better cowgirl and why?

Marie: Lori, because she actually rides horses. I was born in Wyoming, and my grandfather raised cattle and Clydesdales, but that's all the cowgirl credentials I have.

Lori: Yeah, I probably have the unfair advantage here.

7. What words of wisdom can you share with aspiring authors who look up to you as their inspiration?

Lori: Pace yourself because burnout is a thing. Ask me how I know!

Note: Thank you to Marie Sexton and L.A. Witt for taking the time to answer my questions and to Kelly Miller of Riptide Publishing for facilitating. ♥

Giveaway
To celebrate the release of Roped In, Marie and L.A. are giving away $20 in Riptide Publishing credit plus one ebook from each of their backlists. Leave a comment with your contact info to enter the contest. Entries close at midnight, Eastern time, on June 25, 2016. Contest is NOT restricted to U.S. entries. Thanks for following the tour, and don’t forget to leave your contact info!