Review: The Billionaire and His Castaway by Alexa Riley (Alexa Riley Promises #3) 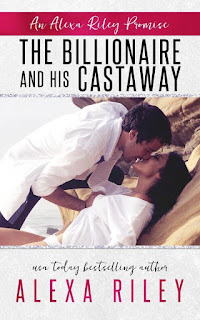 
The Billionaire and His Castaway is the third and latest novella in bestselling author Alexa Riley's Alexa Riley Promises series, which is a collection of books that are a throwback to the more classic romances that are mothers used to read but given the Alexa Riley treatment. So, what does that mean? We get an alpha male who knows what he wants--the woman who's not only captured his attention but his libido and his heart as well--and is prepared to do anything and everything necessary to have her. The female in his crosshairs has a backbone, so don't go expecting some helpless damsel who needs some knight to save her. But with all that sex and steam comes a heavy dose of sweet and sentimental as well, and always that guaranteed happily-ever-after that romance readers have come to expect when it's an Alexa Riley novella.

Recent college graduate Madeline Caldwell has lived in a bubble of sorts, protected by her four brothers. That protection extends to the opposite sex, her older siblings not allowing anyone to get close enough to potentially break her heart or take her away from them suddenly. That doesn't mean Madeline doesn't have her fantasies, and for the past few months, they star only one man: billionaire businessman Kenton Monroe. However, he shall remain firmly in her fantasies only. He made it clear in the beginning that he didn't like her, but now he seems to be around more often, and when he is, he hovers. Billionaire has had his heart set on Madeline from the moment he saw her, and now, he's set the wheels in motion, determined to not just get her attention but to keep her by his side forever. It's time to claim his castaway.

I know Alexa Riley is known for insta-love romances, but with this particular series, the main characters have time to develop their feelings for one another. In this third book, Madeline and Kenton met about three months prior to the events on the island. Madeline is the only sister and youngest sibling to four brothers, all of whom own a security firm employed by Kenton. There's quite a bit of miscommunication that goes on here, so Madeline has formed her opinion of Kenton based on the way he reacts when she's around and his inaction in pursuing his feelings for her. I think Kenton's plan was unique, albeit his online stalking had me raising an eyebrow, and I guess desperate times called for desperate measures. The Billionaire and His Castaway was an easy-breezy read and great addition to the series. This gets 4.5 stars. ♥

Purchase The Billionaire and His Castaway on Amazon.