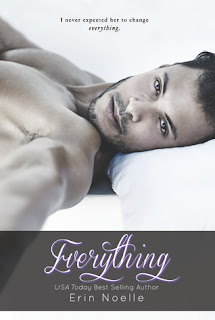 "I couldn't imagine being here without you," I admitted, dropping my forehead to rest on hers, our eyes locked in on each other."I'm not sure what in the world I did to deserve you, Belle, but I don't plan on letting you slip away."

"Then don't," she whispered.

"I'm already there to catch you, rockstar."


Everything is the first novel in the Singed Wings series from bestselling author Erin Noelle, which is also my first read from her. This is a spin-off of her highly successful Book Boyfriend series, but this can totally be read as a standalone, especially since all I knew of the original series was what I read on Goodreads. The new series features the fraternal twins of the main characters from Book Boyfriend who also write music and perform, with book one being about the elder of the two, Everett Templeton–musician, high school senior, and virgin. During a New Year's Eve gig at their family-owned bar, Everett locks eyes with Belle, a young woman who calls to him in a way no one else ever has before. They share one steamy, unforgettable moment together in the cab of his truck, but are soon interrupted. Neither one thinks they'll ever see each other again...until they do...in a classroom where Belle is none other than Ms. Arabelle Sloan, art history teacher, with Everett is her student. Can anything come of their attraction if they risk to lose everything?

The attraction between Everett and Belle is instantaneous, and from the time their eyes meet, to the first words they exchange, to their first explosive kiss, nothing becomes everything. But as much as they can't stop thinking about each other, fate hands them would could be a devastating blow. After all, a teacher fraternizing with her student wouldn't just mean the end of Belle's teaching career, but it could have her ending up in prison, all the more since he's only seventeen and she's twenty-five. However, Everett refuses to let Belle pretend nothing happened. He wants his shot with Belle and he's more than ready to remind her of that New Year's Eve. Their chemistry is more than palpable and Belle finds herself unable to resist Everett for much longer. Their secret love affair feels like a fairy tale, and all they need to do is wait until Everett graduates to make their relationship more public. But when Belle's past collides with her present, and Everett is filled with doubts, will the rock star and the teacher be left with nothing but broken hearts?

Okay, I admit it. There's something about a teacher-student romance that calls to me, as I'm sure other readers can relate to. Maybe it's the taboo element or the age difference between the main characters. It's that illicitness that makes this such a risque read, but the fact that it's presented in a heartfelt story that doesn't make you doubt that these main characters are indeed in love and not just in lust is what makes it a contemplative one. Based on this novel alone, I would say that Erin Noelle is a writer with a gift for the written word. She made me hope for Everett and Belle and the happily-ever-after that may have seemed like an impossibility, given everything that was against them. How'd she do that? She never lets her readers lose sight of everything that was also going for them. It's easy to fall in love with her characters and with the story that they tell. This was so much more than a rock star romance, even more than a teacher-student romance. Everything was a story about a love that exceeded expectations. Five-plus stars. ♥

Purchase Everything on Amazon | B&N.