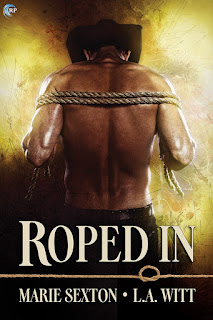 Roped In is a standalone M/M cowboy romance from the writing team of Marie Sexton and L.A. Witt, though I do hope that it inspires a sequel for one of the characters, and according to Marie Sexton, there are plans but they can't confirm when it'll get done and released. This is a fairly quick read and I was able to get through it in one sitting. It's about a cowboy named Graham Montgomery, who has had feelings for his best friend and rodeo partner for years but one awkward and disastrous night has made any chance of more nothing more than an impossible dream for Graham. A run-in with Kaz Miller, an animal rights advocate and regular protester outside of rodeo events, has both men trying to put the other in his place, but it also becomes an avenue for Graham to finally embrace who he really is...with the help of some rope.

I'm feeling rather torn about this book. The story went in a direction I wasn't expecting and more often than not, I'm all for things that take me by surprise because then it means it isn't the same old thing I'm getting. Unfortunately, the combination of Graham and Kaz just didn't click with me. Throughout a love story, I tend to get that hopeful feeling thrumming through my veins, that feeling that signals that I'm invested--to whatever degree--in the couple I'm reading about. In the case of Graham and Kaz, I got that hopeful feeling...I hoped that they wouldn't end up together. I know, I know. That sort of thing isn't up to me. I'm the reader, not the author. I get that Kaz helped Graham get over whatever inhibitions he had about being gay, but does that equate to more than one lust-filled night together? Umm, nope. Not to me.

Yes, I admit it. I wanted this to be all about Graham and his best friend and supposed unrequited love for Jackson (whose last name I don't recall being mentioned). These two had the whole sexual tension thing down pat and then there was that one moment that clicked for me, cementing what I believed would be the beginning of a happily-ever-after, or at least, a happily-for-now scenario for them. Graham's sudden switch in thinking that he and Jack wouldn't have lasted had they gotten together didn't make sense to me. The snarky side of me couldn't help but think that maybe this was Graham's way of getting back at Jack. So, while I wasn't a fan of KazHam (even that doesn't sound appealing), I still hope Jackson gets his own story. Maybe if I wish hard enough, Graham will come to his senses in the sequel. Roped In gets 3.5 stars. ♥