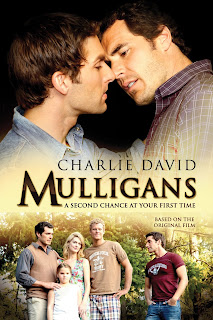 One thing that I do believe only my best friend knows about me is that I actually like to watch golf on television. Where others find the sport to be too long and, therefore, boring, I get this sense of peace watching it, and then there's that thrill when a player makes what looks like an impossible shot. Now, where am I going with this? Well, you see, in all my years of watching golf, I have never, ever heard the term "mulligan" before. Seriously. So, when I started reading Mulligans, a standalone novel from author and actor Charlie David, I was wondering why the book was titled the way it was, especially since none of the characters had "Mulligan" is their last name nor was their the article "The" before "Mulligans" in the title, which clued me in that it probably wasn't about a family. The term is mentioned in the story, and with a quick Google search, I discovered what it meant--a mulligan is a do-over, a second chance to perform an action that may be deemed as a fail. For obvious reasons, mulligans aren't allowed in actual PGA events (which explains why I never heard the term before), but it's apt for this story about a college student who embraces his sexuality but in doing so, changes not only his own life but those he spends the summer with.

Chase lucked out when he not only got to transfer to the prestigious college he now attends but received a full scholarship as well. The additional bonus was having Tyler as his roommate and in the span of a year, the two become the best of friends. When Tyler invites Chase to join him and his family at their lakeside cabin on Prospect Lake, Chase jumps at the opportunity. He's never experienced what it's like to be part of a family, his father having died when Chase was young and his mother dealing with her husband's death by drowning her misery in alcohol. With a picturesque backdrop, the Davidsons appear to be the kind of family that Chase would label "ideal", and he can't help but be envious of his best friend's life. But behind the perfection the foursome of Nathan, Stacey, Tyler, and Birdy Davidson project, Chase can't help but take note of something he can't quite decipher and that something belies the easy smiles that now look strained. In the calm setting of Prospect Lake, Chase comes to the decision to be honest with himself and his best friend. Being free to finally be who he really is, Chase doesn't realize how his presence and self-acceptance is about to up-end several lives and may lead to painful consequences he had never considered.

If you're looking for a love story, I may as well give you a heads-up: Mulligans isn't a romance. Yes, there are moments of affection between Chase and a couple of other characters in the story, but this novel is the journeys that several of the members of the cast are on and how the maps of their lives can change over the course of one summer. The writing is sumptuous and I highly commend Charlie David on his clear gift for weaving a tale and providing his readers with fantastic imagery. I had no problems picturing in my head what Prospect Lake looked like, seeing things from Chase's, Nathan's, and the other character's eyes. But it wasn't limited to me being able to envision the surroundings; you could feel what the characters were feeling--the confusion, apprehension, freedom, anticipation, anger, and so on. I know that Charlie David wears a few hats, but I certainly hope he won't be hanging his "author" hat for far longer than necessary because the man is a talented writer. I will say that if you're looking for the "typical" happily-ever-after, you're not going to get it here. Like I mentioned earlier, the cast is on a journey and Mulligans makes clear none of the journeys have ended; they're just off in different directions. Five stars. ♥