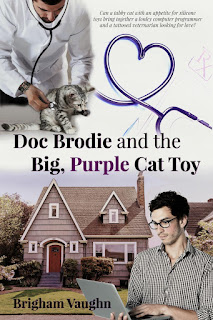 
Doc Brodie and the Big, Purple Cat Toy is my first Brigham Vaughn read and proved to be a sweet and lighthearted one, with several moments that had me either smiling or laughing. I didn't know that this is a companion novella to another story, Geeks, Nerds, and Cuddles, which features friends of the main couple in the new release, but this read quite well as a standalone, so you don't necessarily need to read Geeks, Nerds, and Cuddles prior to going into Doc Brodie and the Big, Purple Cat Toy (though I've already got it on my to-be-read list and will hopefully be able to read the former when I've got free time).

Grant Murchison is lonely. His one and only relationship ended two years ago and when he isn't preoccupied with work, Grant only has his kitten Molly to keep him company. When Molly ends up using a purple dildo as her personal chew toy and makes herself sick in the process, Grant is beyond worried and rushes to the closest emergency vet clinic in the area. There he meets Dr. Brodie Hall, who is taken by both Molly and her owner. Grant is embarrassed by the circumstances of Molly's need to be seen by Brodie, but Brodie is captivated by the shy and skittish computer programmer. Can they make a go of a relationship?

The story is paced pretty well, with far more going on than I would have expected, not that that's a bad thing. The attraction between Grant and Brodie is clearly mutual as is Grant's lingering humiliation each time the whole sex turned cat toy is brought up. That would be normal, of course, but Grant has deeper reasons for feeling the way that he does. I liked how patient Brodie was with Grant and the easygoing demeanor both men had for both Molly (Grant's cat) and Ruby (Brodie's dog) played a big part in why I found myself liking the book. Doc Brodie and the Big, Purple Cat Toy was a satisfying, four-starred read. ♥