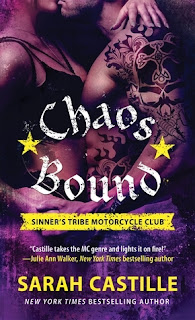 Caught in a maelstrom of memory, torn by emotion, something inside Holt snapped. He loved them. He hated them. He had been through hell and back, suffered through hope and despair. He had lived to kill them and it was damn hard to throw it aside and accept they hadn't abandoned him because if he knew one thing about himself, it was that he would never leave a man behind. He needed to finish this. He wanted the torment to end.

Chaos Bound is the fourth and latest release in the Sinner's Tribe Motorcycle Club series from author Sarah Castille and is my favorite in the series and the one that I would consider the author at her best. After the events in the third book, Sinner's Steel, you knew that things were far from over between the Sinner's Tribe MC and their main enemy and MC rival, the Black Jacks, and with the clue dropped by Marcus "Viper" Wilder, it was clear that Holt "T-Rex" Savage was not dead. This fourth book has Holt three months into his being a prisoner of the Black Jacks and having lost all hope that his brothers would rescue him. He's filled with anger and a gnawing need to seek revenge, not just on Viper and the Black Jacks, but on the Sinners as well, believing that they had abandoned him after he sacrificed himself to save a brother's old lady. It takes the sudden appearance of a young woman named Naiya Kelly, herself kidnapped by Viper and his victim seven years ago. This book is their story of love, revenge, and freedom.

When Holt Savage decided to exchange his life for that of a fellow Sinner's old lady, he didn't expect to still be at the hands of their enemies, tortured incessantly. He's barely alive, but the one thing that fuels him is his desire to make those who have physically, mentally, and emotionally broken him pay for what they've done. He isn't sure what's worse: everything he went through in the Black Jacks's dungeon or the thought that the Sinners left him to die, turning their back on him. When Naiya Kelly is thrown into the dungeon together, he finds an ally. Their escape, however, has made the target on their backs far larger than before. No one gets away from Viper scot-free. But who are they to turn to? Holt doesn't trust the Sinner's Tribe MC and the fact that his best friend is a member has Holt holding off on even contacting James "Tank" Evans. He isn't sure who it is he can and can't trust; the one thing he's sure of is that the one person he does trust and needs by his side is Naiya. Holt wants revenge, but how much is he willing to risk for it?

My heart broke for Holt in this story. To have the thought that the very people you considered family abandon you at your time of need, especially after having put your own life on the line for them, is one, when left to fester for months, that could irrevocably change you. His being alone made him harder and colder, but it also made him far more independent, realizing that there are times when you need to rely on yourself. The love he and Naiya share was borne out of similar circumstances, but these two had demons that they needed to exorcise. They had a common enemy and I loved seeing them become each other's protector, ready to do whatever was necessary for the other. Holt was no longer the T-Rex introduced to readers in the series. He became his own man and wanted to be a better one for Naiya. I liked how everything was resolved between Holt and the Sinners because it provided much needed closure. I hope there's more of the series or at least a spin-off for us to look forward to! Chaos Bound gets five-plus stars. ♥

Read my reviews for the Sinner's Tribe Motorcycle Club series:

Beyond the Cut (book two) - five stars - My Review