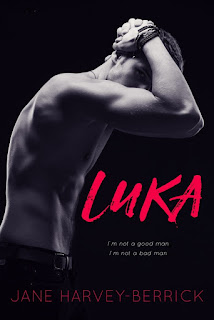 Not everything can be mended. Not every mistake can be put right.

I've made some bad mistakes, made the wrong choices. Who hasn't?


Oh, Jane Harvey-Berrick... Have you made it your mission to break my heart with each book of yours that graces my e-reader? Ash Novak's story was as much Laney Hennessey's in Slave to the Rhythm, but this...this sequel was all Luka Kokot's. From the very beginning of Luka, the man makes it plaintively clear that he isn't a good man, but neither is he a bad man. He is human, prone to making mistakes, and sometimes, there is no coming back from this mistakes. You can run from the consequences or stand firmly by your convictions and make the most of the situation. Of course, you can always choose to be absolutely ambivalent about the whole thing. But see, Luka isn't like that. Yes, he is a man who is often led by his personal desires and he may not always take into consideration how his choices and decisions may affect him and others in the long run, but he is a man who cares, especially when it involves the innocent, the untainted. Luka's tale is no easy read, but it's a thoughtful one and one that you can't quickly set aside.

After six months of being on tour with his dance company, Luka Kokot and his fellow dancers are taking a much deserved and very welcome break before preparing for their next round of performances. His love for dance is unquestionable, as his well known policy of not sleeping with anyone he works with. It's simply easier to maintain that fine balance of professionalism and friendship with everyone in the troupe. But one drunken night has him sharing a bed with Sarah Lintort, a dancer and a friend. She then heads off on her vacation to Australia, leaving Luka with the key to her flat, a pre-arranged plan that would have Luka staying in London without having to worry about rent. She also leaves him a note informing him about a party he should go to. When he wakes up the next day, he realizes he spent the night with a man named Seth. They agree to meet up again, but when Seth discovers that Luka is actually bisexual and not gay, things falter. Then Luka figures out that Seth is Sarah's twin brother and far more complications abound.

Is this serious Jane Harvey-Berrick's first go at an M/M romance? Well, if it is, I certainly hope it won't be the last, but then I'm unabashedly an M/M romance fangirl, so the more the merrier, I say. And it isn't just about the sex scenes either. She's crafted an intense story about two men who have genuine and mutual feelings for one another, but it's also an intriguing one. This isn't the first book I've read where a bisexual main character is looked upon by both gays and heterosexuals with a hint of disdain, almost as if they've unfairly given themselves an edge by having fluid sexuality, but Seth's handling of Luka's being bi had me feeling a mix of indignation and disappointment because this was the first time one of the main characters reacted in such a manner. Did Seth Lintort love Luka Kokot? I have no doubts about his love for Luka, but I guess it boils down to a matter of respect and acceptance, so Seth lost quite a few points in my book as the story went on. Of course, that doesn't mean Seth was a bad person, just misguided and rather foolish.

Let me stress, however, that this isn't just an M/M love story. Luka is a man who loves freely, not allowing sexuality get in the way of choosing who he shares his bed and his life with. The Siblings Lintort play vital parts in Luka's life in London, both in positive and negative ways. My heart squeezed, then cracked, and ultimately broke for Luka. Was he blameless in everything that happened? No, but he owns up to his failings and to see a man put in the situation he was in later in the story and watch him become so defeated just tugged at my heartstrings and had my gut clenching in empathy. The ending was so different from what I was expecting in a story like this, but if it's one thing about Jane Harvey-Berrick that I love, it's her ability to never disappoint me. She's done exactly that with Luka's story, because even though I imagined a completely different ending, I was left rather content with the direction Luka's life was headed because it was full of hope and purpose. Five-plus stars for Luka and I can't wait to see where the series takes us next. ♥

Read my reviews for the Rhythm series:

Slave to the Rhythm (book one) - five-plus stars - My Review