Review: Till I Kissed You by Laura Trentham (Cottonbloom #3) 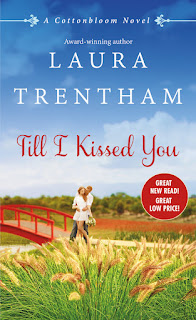 His laughter tumbled through her but faded quickly. "Did you mean it?"

With the fear of the storm and their lives hanging in the balance, the truth came with ease. "Of course I love you. I loved you even when I hated you."


Best. Small-Town. Romance. Series. EVER. And you owe me a few tissues, Laura Trentham, and I'm not even counting the tissues you cost me with the first two books in the Cottonbloom series. Maybe we should go with a box of tissues just to call it even. Gah! I loved how all three books were set in Cottonbloom, but how this place that was home to many was separated by more than a river. Generation upon generation on either side of Cottonbloom has led to a rivalry that's gone on too long, not even waning in the least, not with a competition between the Louisiana and the Mississippi sides to earn pride and honor plus much needed grant money. At the helm of the competing festivals is none other than twenty-nine-year-olds Sawyer Fournette and Regan Lovell, parish commissioner for Cottonbloom, Louisiana and town mayor for Cottonbloom, Mississippi, respectively. The first two novels made it clear how fierce the competition is, not just between the two locations but between Sawyer and Regan themselves, former high school sweethearts who loved beyond measure but allowed a misunderstanding and a lack of communication–plus the interference of a meddlesome mother–to wreak have for a decade.

Sawyer Fournette and Regan Lovell went from being madly in love with one another as teenagers to not wanting to have anything to do with each other for ten years. Spurned by their broken hearts and now adversaries competing for the title of Best Small-Town Festival of the South from Heart of Dixie magazine, each one has gone to great–and sometimes absurd and childish–lengths to gain the upper-hand and throw off their rival. But now it appears that someone is taking things a step too far, causing damage to property and costing people their livelihood. Sawyer and Regan find themselves forming an unexpected alliance in order to hopefully find the perpetrator before any further harm is done. Being in closer proximity and more constant contact with one another, however, is causing feelings both of them thought were long buried–or tried to valiantly ignore–to sneak back up on them. The attraction and the chemistry is even stronger than before, but can Sawyer and Regan overcome their doubts and insecurities to take this second chance and make up for all those years they lost or will the pressure of competition and the seemingly inescapable notion that they'll always be the orphaned, poor swamp rat and the privileged 'Sip.

I'll say it again: Gah! This series has been so freakishly consistent in terms of the impeccable storytelling that Laura Trentham has employed. I wasn't kidding when I bestowed upon her the title of "Queen of Small Town Romances" because the woman is a genius in weaving together an engrossing story arc that never wanes throughout the two series that she's come up with–Falcon Football and Cottonbloom–and that I've enjoyed immensely. Yes, both series are set in small towns and highlight love, family, and community, but all six books–three for each–are distinct from one another, able to stand on their own merits. I've made no secret of how much I loved reading Kiss Me That Way and Then He Kissed Me, but having seen what was going on between Sawyer Fournette and Regan Lovell from the beginning, I wanted their story to be as fantastic as its predecessors, and I'm thrilled to say that Till I Kissed You was perfection. This was a second chance romance slash lovers to enemies to lovers and in terms of those combined tropes, it made for a read that went above and beyond my expectations. However, it also brought the series full circle, giving fans everything they may have possibly wished for the three couples.

Sawyer was the Fournette child who knew the importance of bonding together, of focusing on the good instead of the bad. There was no doubting his love for his family and his desire to make his siblings proud of him but there was always this hint of vulnerability. It's that same vulnerability that Regan has always had, hiding behind her poise and grace, both instilled and constantly reiterated by her overly involved mother. Sawyer and Regan seemed to be opposites in every way and I admit that I wasn't too much of a Regan fan in the first two books, but she won me over once I got to know her better here and saw just how much she still cared about Sawyer. As always, there were some surprises in the story, especially when it came to revealing who was behind the sabotage attempts to end both Cottonbloom festivals. I really liked how everything was wrapped up, although, I must say that there's one particular supporting character that I've grown curious about and that's Jeremy Whitehurst, who was introduced in the second book. We get a teeny, tiny bit of his back story and I find myself wanting to know more about him. A novella maybe? A spin-off? Wishful thinking? With fingers crossed and a satisfied heart, five-plus stars for Till I Kissed You. ♥

Then He Kissed Me (book two) - five-plus stars - My Review

Purchase Till I Kissed You on Amazon | B&N | Kobo.