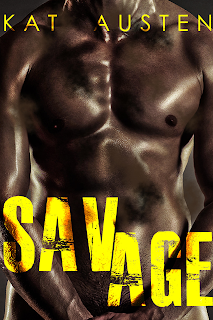 Savage is the latest novella from author Kat Austen and it puts into play the idea of a young nurse who finds herself rescued by a man whose one word to her is "mine" and they're both marooned on an island. Twenty-four-year-old Jane is looking for something missing in her life. Spending her savings on a sailboat to sail around the Pacific may help her find what she's looking for, but Mother Nature has other plans. A storm takes out her sailboat but Jane is rescued by a man in nothing more than a loin cloth and he takes her into his sanctuary on the island near where her sailboat sank. Nicknaming her rescuer "Tarzan", Jane wonders if the seemingly savage and wild man and surroundings could prove to be the home she desires.

I've read all of Kat Austen's novellas so far and each one has been distinctly different while still being easy reads that have never failed to entertain me in the short period of time it takes to get through them. Jane and her Tarzan, aka Grant, had an interesting story to tell and it had a couple of twists that kept things moving forward. I was surprised with how the story played out towards the end, and while I did picture a completely different ending, I have no complaints. As always, the author has satisfied my need for a quickie but quality read. I admit, though, that Savage isn't my favorite among her currently published work. However, that's more of a matter of story preference than anything else. This novella gets 3.5 stars. ♥