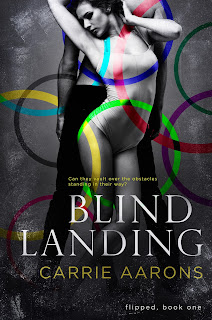 Nineteen-year-old Natalia Grekov has one goal: to make it on to the gymnastics Olympic team. She knows she has what's required to head to Rio and she's more than willing to suffer through the the questionable and reprehensible training technique of the man tasked to put the teams together. She's physically ready, but she needs to overcome the one thing plaguing her and could cost her a spot on the team: fear. She can handle every event except for the balance beam. When twenty-two-year-old Spencer Russell, considered one of the best gymnasts in the country before an injury forced him into retirement and becoming one of the coaches at the Olympic training center, offers to help her get over her fears, Nat takes him up on it. They're attracted to one another, but he's a coach and she's a gymnast and if word got out about their one-on-one sessions--both as inside and outside the gym--it could cost Nat her spot and Spencer his job. It's always been about winning Olympic gold but will it be in exchange for losing Spencer and a broken heart?

I quite liked this sports romance! Blind Landing is the first novel in the Flipped series from author Carrie Aarons and is my first read from her. Nat and Spencer are a fun couple to get to know, what with their playful and flirty banter and their love for the sport they're both dedicated to. A lot of the book is lighthearted and fun-filled, and the author's knowledge of the sport is quite commendable, making it clear that gymnastics was something she knew by heart and it wasn't just thrown into the story as part of the backdrop. The book, though, also has its dark points, especially when it comes to what these aspiring gymnasts had to put themselves through in order to even just be considered as an Olympic hopeful. Training in any sport takes serious dedication as well as physical, mental, and emotional toughness. Interspersed with the illicit romance between Nat and Spencer, it makes for a thrilling read, one that I consider one of the highlights of this month so far. I can't wait to read more. Five stars for Blind Landing. ♥