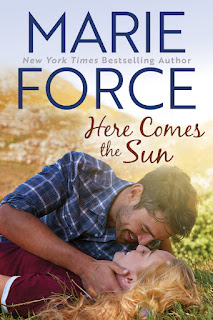 Here Comes the Sun is the third and newest installment in bestselling author Marie Force's Butler, Vermont series--the spin-off of her popular Vermont-based Green Mountain series, both of which center on the Abbott and Coleman families, headed by grandfather Elmer Stillman--and it's the story of thirty-one-year-old Wade Abbott and twenty-nine-year-old Mia Simpson. They met two years ago at a yoga retreat, and from the first moment they shared, there was a connection between them that couldn't be denied. Unfortunately, it was a connection that neither one could fully explore. Where once they had phone conversations and kept in touch, the last year had Mia cutting ties altogether, leaving Wade wondering where things may have gone wrong and worried about the woman he's never stopped thinking about. Worried because, if his suspicions are right, Mia is the victim of abuse from the man she shares her life with. And then one stormy night, two years after they first met, Wade comes home to a bruised and battered Mia collapsed on his doorstep. He's willing to do anything for her... even go against his family.

I know it sounds as if you already have an idea about what this book is all about, but let me just say that everything I wrote in the paragraph above is just a snippet of the story. There's more to Wade and Mia's love story, and it's certainly a unique and well-written one, but then I would expect nothing less of Marie Force. I confess that I had to suspend my disbelief to a degree when it came to Mia asking Wade to specifically agree to her plan and he wholeheartedly doing so. I get that they had a connection, and had she merely been asking for shelter and protection, then I would have easily understood his easy agreement, but what she needed from him was unexpectedly above and beyond that I had to quiet down the cynic in me. I did like how protective Wade's family was of him, how they were the voice of reason, even though Wade wasn't really looking for their permission in as much as he was their support. I thought this would have more suspense than it did, but as a whole, I enjoyed what Here Comes the Sun had to offer, and I can't wait to read more from the idyllic town of Butler, Vermont. Four stars. ♥