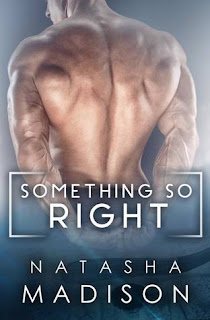 Something So Right is the first novel in Natasha Madison's Something So hockey romance series. This was being offered for free on Amazon, and at the time, the third book was a couple weeks away from being released, so I jumped in, given the mostly positive reviews. We're introduced to thirty-four-year-old divorcee Parker Moore, mother to fifteen-year-old Matthew and five-year-old Allison and owner of the family-owned skating rink that now has thirty-year-old professional hockey player Cooper Stone training at. Things get off to a rocky start between the two, and the dislike is very much mutual. However, you know what they say about the thin line between love and hate, and these two fall for one another. Parker is quite aware of the age difference between them and the fact that she has two children, but Cooper makes it known that the only place he wants to be at is right by this family's side--a family that he quickly considers his own. But with meddlesome exes who don't seem to know the word no, Parker and Cooper will need to trust in their love and not listen to those who think they're all wrong for each other.

There's a lot to this series starter that ring familiar, but the author did a good enough job to put her own bits and pieces to keep the story from being boring. Cooper was every bit the alpha athlete, but Parker was no shrinking violet. She gave as good as she got, and she certainly kept Cooper on his toes. The guy had to work to earn a place in the close-knit and protective family unit composed of Parker and her two kids, Matthew and Allison Grant. So, if we're talking about just the story and the characters, I don't have all that much to quibble about. My main issue--and this is what's going to knock my overall rating for the book down--is the editing or lack thereof. I was beyond tempted to grab a red pen and make notations and corrections because, goodness me, there were a lot of them. From misspelled and misused words to grammar issues and sentence construction, this book faltered in a way that I simply couldn't set my criticism aside any longer. Unfortunately, it's stuff like this that gets to me because of what I do, and it did affect my reading experience, so those countless wrongs leave Something So Right with three stars. ♥

Purchase Something So Right on Amazon | B&N | iBooks | Kobo.