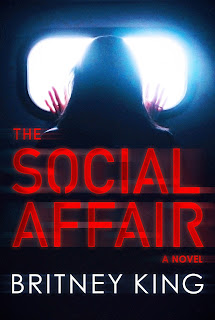 Lie even if they catch you red-handed. Remain faithful to your lies even in the face of overwhelming evidence. I meet his gaze, letting a small smirk convey the simmering fury. Rage is important when you’re trying to conceal the truth.

Damn it. I hate it when I'm utterly obsessed with a book I've read but I can't share a lot of the exact reasons why with my fellow book whores out there! Such is the case with Britney King's newest standalone, the ingeniously titled The Social Affair. This novel just so happened to be my fourth read from the author but my first one outside of her fabulously addictive Water trilogy, which was part of my year-end list of top reads for 2017. Bar raised, expectation astronomical--this book had a lot to prove, and I'm blaming King's gift for weaving such suspenseful tales that lure you in and by the time you realize what the hell is going on, there's simply no turning back or away.

Okay, I'm going to try and give you the very basics to this mystery suspense. If it starts to feel spoiler-y, go ahead and stop reading. There are three important characters here: a barista named Izzy Lewis and husband and wife Grant and Josie Dunn. For all intents and purposes, the initial interaction between the single woman and the married couple was nothing more than a blip in time. It was completely uneventful, but it turns out to be the beginning of an obsession. Izzy admires Grant and Josie, but that admiration crosses one line too many. What you see isn't always what you get, and it's a lesson that all three will learn...and one will use to their total advantage.

I'm looking at that paragraph and hoping I enticed those who haven't read the book instead of spoiling anything. Seriously, this is one of those books that I insist you check out. It's different in the best ways possible, and if you're familiar with the author's writing, you'll know that she excels in this sort of thing. The writing is so on-point that I'm finding myself wondering when she'll release a new book next and if I can make time stop or go more slowly so that I can read the titles on her back list that I've missed out on. I refuse to compare The Social Affair to any other novels that fall under the genre written by other authors because King's stands on its own merits. Five-plus stars. ♥