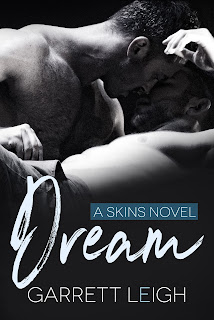 I love angst and Garrett Leigh offers up the kind of angst that's backed up by fantastically strong writing, a unique story, and complex main characters whose layers readers will want to peel off one at a time. She serves all that up with Dream, the first in her new Skins series, and it's every bit as angsty and lovely a read as I could have hoped for, but then I expect nothing less from a Leigh-penned novel. If you've read the author's work in the past, you'll know exactly what I mean when I say this. Now, this latest self-published gem of hers has set the bar high for everything to follow in the series but not impossibly so. If you've never read anything by Garrett Leigh, do start with this one!

Main character Dylan Hart was originally introduced in What Matters, written under Leigh's nom de plume of Gracie Leigh, as the best friend of Sam Nowak, who found love with Edwina "Eddie" Dean. Dylan wants his own slice of happiness, and he knows that the first step he needs to take to move forward is to actually take one back from his two closest friends. He finds release in a private club with a blindfold on and at the hands of a guy named Angel. At his job as a debt advisor, he may not recognize his latest client, but there's something about him that feels...familiar. Angelo Giordano is as beautiful as he is prickly. He could very well turn out to be more effort than he's worth, but there's something undeniably addictive about the man. Dylan's falling, but will Angelo catch him?

I was glad to see that Dylan was going to get his own story told after making his mark in What Matters, and Garrett Leigh does him justice. There were things he had to learn, not only about Angelo but about himself as well, about just how much he was willing to fight for the man and what they were growing between them. Then there was Angelo's situation with his family, the business they had, and his own financial and health woes. These two men had to come to terms with who they were and what being together would entail. As nice as it was to see Sam and Eddie--plus a mention of Tom Fearnes and Cass Pearson from Misfits--in this series starter, I was glad that the spotlight truly remained firmly on Dylan and Angelo. This had sex and romance and drama and a hint of suspense to boot. If the rest of Leigh's Skins series is as good as Dream, then it'll be a test of patience on my end. Five stars! ♥