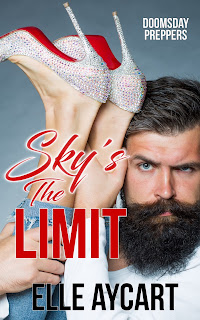 Well, well, well. Talk about being awesomely impressed! I've never read anything by Elle Aycart before, and then came along Sky's the Limit, the first in the author's new Doomsday Preppers series. This was a romantic comedy read that was, well, sky's the limit in terms of fabulousness. See what I did there? Anyhoo, Aycart brought the quirk (and I do love me some quirk as much as I do angst) and created this offbeat story about a fashionista of a city girl named Sky Gonzalez who finds herself in Paris. No, not the City of Light and fashion in France, but the city of bleariness and flannel in Minnesota. If that wasn't bad enough, she's later stranded smack dab in NoName, Minnesota (called as such because...well...it has no name). She's rescued from her dire circumstances (well, dire as far as Sky is concerned) by the hottest of all bearded men happens to be the one nicknamed "The Alchemist".. Logan Nolting is forced to keep Sky in his home, no thanks to neighbors deeming her hazardous to their health. The preppers may be "safe" from Sky, but in palpably close quarters, how "safe" is Logan from Sky and she from him?

I quite enjoyed this series starter, and it certainly sets the bar high for the books that are to follow. It's a breath of quirky fresh air that I need amidst all the heavier books that I've come across the past few days. This being my first Aycart read, there was a bit of wariness and uncertainty on my end, although I'm always on the look out for new authors to check out. I liked the chemistry between the main characters, what with that push and pull that make Logan and Sky such an entertaining couple. Sky isn't some simpering girl waiting for Logan to come on his trusty steed to rescue her. Nope, this woman has a backbone and a brain to go with that beauty of hers, and she sure as heck knows how to use each one. Then there's Logan, who, thank goodness, isn't the poster child for asshattery or jackassness. He's got the beard, the brawn, and the brain, and a very dirty mouth. Nice (though I'm honestly not really a fan of bears in real life)! Add to that a cast of offbeat supporting characters that help to bolster this creative story even more, and Sky's the Limit ends up being a fun, romantic comedy read that I can easily give 4.5 stars to. ♥