Review: The Road to You by Melissa Toppen 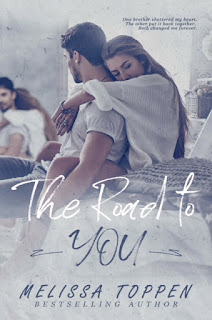 Note: This ARC was provided by the author via Between the Sheets Promotions in exchange for an honest review.

If there was any doubt how well Melissa Toppen can tug at her readers' heartstrings, then might I suggest that those naysayers check out her latest release, The Road to You. This standalone tells the story of a twenty-two-year-old young woman named Elara Menten, who finds her best friend, Kamden Thaler, at fifteen and spends the next seven years slowly but surely falling in love with him. On the day she confesses to him her feelings--feelings that he promptly admits he's had for her for years--something goes terribly wrong, and life as they both know it irrevocably changes, but not just for them. When Elara crosses paths with Kam's older brother Kane, she finds a shoulder to lean on, to listen to her regrets and to mourn dreams that were lost because of one nightmare. Kam is Elara's first love--the one who still owns her heart--but could Kane be the one Elara will love last and will he still be by her side when he learns the truth behind what happened the day everything changed and all was lost to them?

I swear, it's never easy trying to refrain from giving away details of why a book has made you fall in love with the characters and their story, especially in the case of this particular standalone. Here's the thing, when you get to reading this book, you'll learn why Elara's heart is broken as early as the first chapter. Her relationship with Kam is played out through flashbacks, and it's the kind of love story that has the semblance of innocence, one that's founded one years of friendship. What she has with Kane is borne of something they both share, a mutual...erm...something that neither one wanted but they have to live with. Gah! See what I mean? It's difficult to keep things spoiler-free, and if you read between the lines, not only of my review but that of other reviews I've seen posted online, it isn't too hard to figure out what the precursor is to Kane and Elara's relationship. If you love angsty romance reads, you may want to check out The Road to You. Have tissues on-hand with this five-star book!

Purchase The Road to You by Amazon.