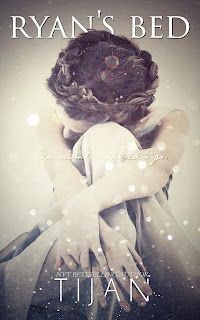 “Look, you don’t really say much, and I’ve got a feeling I’m the only one you are talking to…when you feel like shutting the world out, you don’t have to do that to me. I’m not everyone else.”

It's been a few days since I read Tijan's just published young adult (YA) romance standalone, and I'm still experiencing a book hangover of epic proportions. Ryan's Bed may sound like a strange title and it may make you think of something tawdry or simply about sex. Look again because this book was everything I didn't know I wanted or needed. This isn't my first Tijan read either--although I've only read four novels so far--but it's officially bumped Carter Reed as my favorite Tijan read, and that's saying a lot because that was my first one from the author and it set the bar impossibly high for everything else that was to follow. Well, I guess it wasn't all that impossible because here we have the author's new book and it was hauntingly as heartrending as it was hopeful.

Turning eighteen was meant to bring in changes for Mackenzie Malcolm--senior year, prepping for college, new school, and new home--and these were the ones she had expected. What she could never have been prepared for, however, was the loss of her twin sister Willow. Finding her in a pool of blood is forever etched into her soul, as are the unanswered questions. Everyone is mourning her death. From their family to their circle of mutual friends, everyone tries to be there for one another. The one person they struggle to be there for, though, is the girl whose face is the same as the one who is no longer with them. Mackenzie doesn't want to mourn her sister--she wants Willow back, and any sense of peace she had feels forever gone. The one place she finds it is in Ryan Jensen's bed.

There's a lot I could say about this book, but I'm holding myself back because I'm afraid that once I start gushing about it, I'm going to end up mentioning parts of the book that may very well end up becoming spoilers. What I can tell you is that while the romance between Mackenzie and Ryan plays a big part in the story, this was, at its very heart, Mackenzie's tale to tell. This was her journey, and there was nothing easy about it. How do you continue living your life when the person you started your life with from within your mother's womb is now gone? Mackenzie, Willow, and their younger brother Robbie each had their "roles" to play, but with Willow's life cut short, Mackenzie's image of herself and who she is at home and in school shifts and changes but for what reason?

My heart went out not just to Mackenzie but also to Ryan, Mackenzie's family, as well as a couple of Mackenzie's and Ryan's friends. Each main character and every peripheral one here had a story to tell. You'd think that would be distracting. Instead, those side stories allowed Mackenzie to either empathize with them or to recognize some part of herself within them. She was this young woman who was broken but the pieces were never really missing. They were still there, with the when and how were not part of some predetermined time table. Mackenzie may have been living after Willow's death, but barely so, and she had to live her life--for herself--and not the life Willow could have lived. Ryan's Bed was about letting go, letting others in, and letting oneself live and love. Five-plus stars. ♥